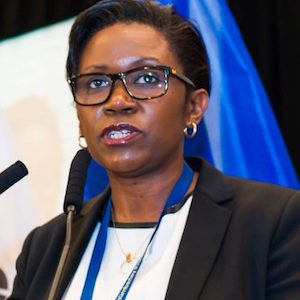 In a statement on the WDC site, Kaninda said her resignation, which was effective Aug. 31, stemmed from  a “new opportunity [that] has presented itself, and at this stage of my career I feel that I must seize it.”

The news comes shortly after Kaninda was named one of Africa’s 100 most influential women in the May edition of Forbes Afrique.

The WDC is the overarching industry group that represents the trade in front of the Kimberley Process.

Kaninda is the group’s second executive director. In 2017, she replaced Patricia Syvrud, the first person to fill the role.

In her statement, Kaninda said that she came to “the WDC from the Democratic Republic of Congo (DRC), where the mineral extraction sector is dominated by artisanal miners. While acutely aware of the risks involved in artisanal mining, I was and I remain convinced about the opportunities for the better future diamond resources can provide to such individuals and communities, who often live in abject poverty.”

She continued: “[The World Diamond Council] represents both the upstream and downstream interests of the diamond industry, where the well-being and future of all miners and their dependents in the producing countries are inexorably linked to the integrity of diamonds and diamond jewelry in the markets where they are sold.… [W]herever life finds me, I will remain an advocate of the wonderful people who mine, process and trade diamonds. When it mattered, you stepped up and declared that the industry can do more to ensure a better life for all who depend on it. Like the gemstone itself, this is indeed a rare quality.”