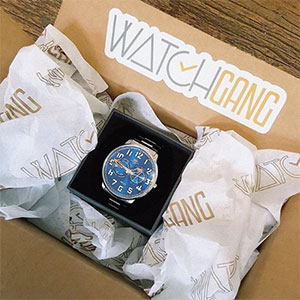 Watch Gang, an online watch membership club based in Glendale, Calif., sends its roughly 23,000 members a brand-new watch (to keep) every month. And if you’re a member, chances are not terrible that one day you’ll get a free Rolex in the mail, too.

The Southern California start-up hosts a drawing for a free Rolex every Friday, awarding the watch-of-all-watches to a randomly chosen member.

The drawing makes an already tempting proposition—paying bottom dollar for a cool new watch every month—even more attractive. “We love the idea of giving someone a Rolex who could never afford one,” says Watch Gang founder Matthew Gallagher, a former software engineer who launched Watch Gang in his garage in October 2016.

Gallagher’s built his business on such visceral retail thrills.

When you become a member, you also enter into a watch community that interacts (and sells and trades watches) via a dedicated Facebook page.

The idea for Watch Gang was born when Gallagher’s father passed away, and he came into possession of his dad’s beloved 1953 Rolex Oyster Perpetual. “I didn’t care about watches before that,” says the founder. “But all of a sudden, my dad’s watch was the most important thing I owned. It got me thinking about watches and how they transcend their utility of telling time. I thought, ‘Why not make a club with a goal of exposing people to new watch styles and brands?’ “

The company largely grew through word of mouth and now has 35 employees happily housed in a new office space in Los Angeles–adjacent Glendale.

Gallagher says the majority of Watch Gang members are “young men in the U.S.—guys who don’t necessarily know a lot about watches, but they’re eager to learn.”

Getting watch brands to partner with the company was a initially a herculean task, Gallagher says, adding, “It was not easy to get partners on board. No large brand had partnered with us so they didn’t want to take a chance. But as we grew, and brands saw the value and the marketing and the fact we could get product on wrists, it became easier.”

The service currently offers watches in the $1,500-and-under range, but that threshold is destined to ascend. Watch Gang recently struck a partnership with NOMOS Glashütte, its first true luxury watch brand partner.

Still, the appeal of Watch Gang hinges more on rarity and innovation than opulence. The company partners with a bevy of cool, under-the-radar watchmakers.

Five of those under-retailed Watch Gang brands—Out of Order (OOO), Fortuna Chronometrie, Laco 1925, Terra Cielo Mare, and Melbourne Watch Co.—are partnering with Gallagher on the wholesale side, too. The company will have its own booth at JCK Las Vegas, in the Clockwork Pavilion (#B27135), to introduce the brands to the larger U.S. watch retail market.

A women’s watch service is currently in the works, says Gallagher, and his ultimate goal for the company is simple: “become the largest club for watch enthusiasts in the world.”

The path to that prize feels decently unfettered, he adds: “The landscape of watches are changing a lot. A lot of brands have been doing things the same way for 100 years. The next generation of watch consumers is online. We’re even out of millennials now and on to Gen-Z. No one’s really doing what we’re doing.”