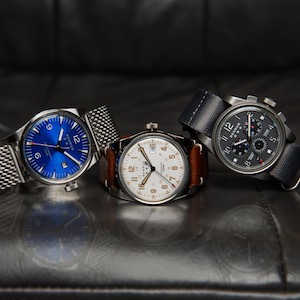 This year a private investment group will relaunch Benrus, a once-popular watch brand that has had a rocky recent history.

The new group, which purchased the rights to the brand in late 2017, is led by mergers and acquisitions lawyer Michael Sweeney (pictured below), who will act as managing partner. He has brought on Michael Goeller, former executive vice president for worldwide operations for Bulova, to act as the brand’s chief operating officer.

The company has made other hires that it is not ready to announce yet, Sweeney tells JCK. Benrus is also formalizing deals for its product to be sold at department stores and high-end independents, and it plans an e-commerce element, he says.

Despite not having much of a market presence in recent years, Sweeney says the Benrus brand—long associated with the U.S. military—remains sought after and heavily valued by watch collectors. He notes that a pair of vintage Benrus watches recently garnered $30,000 at a Phillips auction.

“Do people know it? Absolutely. On the secondary market, it’s so hot right now,” Sweeney says.

He admits that the brand also has to reintroduce itself to younger consumers.

“I feel the time is right for it,” he says. “The values it stands for are, it’s a family brand, it’s an American brand, it has a military background. People have connected with what this brand has done to support the United States in all those conflicts.”

Goeller says that the company will be concentrating on the over-$1,000 price point.

In a nod to the company’s history, the revived brand is located in the building where it was launched—the Hippodrome on Sixth Avenue in New York City.

Benrus was founded in 1921 by Romanian immigrant Benjamin Lazarus along with brothers Oscar and Ralph. (The name is a combination of Benjamin and Lazarus.) For a long time, it was considered the third-largest watch brand in the United States. Among its early celebrity endorsers were Charles Lindbergh and Babe Ruth.

It was also known for its association with the military. Its shock-resistant timepieces were sported by soldiers during World War II, the Korean War, and the Vietnam War, while its Type I Dive watches won fans among Navy SEALs, the U.S. Army, and even the Central Intelligence Agency.

In 1968, Victor Kiam, best known for “I liked the shaver so much, I bought the company” ads for Remington razors, formed a venture capital group to take control of the company. (Regrettably, he didn’t make ads about buying Benrus.) That same year, the brand had a big pop-culture moment when Steve McQueen sported a Benrus watch in the thriller Bullitt.

1977 turned out to be a fateful year for the company: Kiam sold his majority interest, and, under siege from the “quartz crisis,” it filed for Chapter 11. Four years later, the company filed for Chapter 11 again, after which its trademark was purchased by the Clinton Watch Co. In 1995, the brand was purchased by watch company Gruen. Shortly after that, Gruen itself was acquired by M.Z. Berger.

In 2014, former Alex and Ani CEO Giovanni Feroce licensed the brand, hoping to revive it, in association with M.J. Berger. Feroce exited the company three years later, and the intellectual property rights were purchased by the new group.