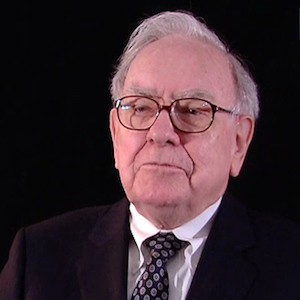 Warren Buffett (pictured), whose holding company, Berkshire Hathaway, owns three jewelry retailers and one jewelry manufacturer, declined an offer to bid on Tiffany & Co., according to a report in the Financial Times, citing unnamed sources.

While LVMH was negotiating to buy Tiffany & Co, the retailer approached the Oracle of Omaha about possibly making a bid.

In 2009, Berkshire Hathaway had purchased $250 million of the company’s bonds when its finances were shaky following the 2008 financial crisis. Buffett has long admired the company and previously expressed interest in purchasing it, according to “bankers who have advised him,” the newspaper said.

However, when approached this time, Buffett “politely” declined to enter the fray. He has traditionally been reluctant to engage in bidding wars for companies.

Buffett confirmed that the conversation took place, the FT reported.

In a December filing with the Securities and Exchange Commission, Tiffany said that, following the LVMH bid, its investment advisers reached out to four other unnamed possible suitors, but they all said they were not interested at purchasing Tiffany at the level sought. The retailer received no other “credible” takeover offer, it said.

LVMH ended up making a deal to buy the company for $16.2 billion, which is considered a record transaction in the luxury sector.

Tiffany will hold a special shareholder meeting on Feb. 4 to approve the merger. The deal is expected to close by the middle of this year.

Buffett’s reluctance irked an analyst quoted by the FT, who noted that Berkshire Hathaway is sitting on a cash pile totaling $128 billion and it has not made a major acquisition in four years.

Berkshire had in the past reportedly expressed interest in Texas jeweler James Avery, but that company opted to remain independent.