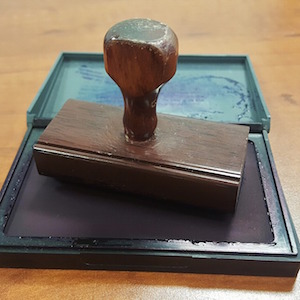 Ever since 2003, after the Kimberley Process (KP) went live, World Diamond Council (WDC) has required that all natural diamonds have the following wording stamped on their invoice:

The diamonds herein invoiced have been purchased from legitimate sources not involved in funding conflict and in compliance with United Nations resolutions. The seller hereby guarantees that these diamonds are conflict free, based on personal knowledge and/or written guarantees provided by the supplier of these diamonds.

The World Diamond Council recently adopted new language for the invoices, which it will ask everyone in the diamond industry to use starting next year:

The diamonds herein invoiced have been purchased [or sourced] from legitimate sources not involved in funding conflict, in compliance with United Nations Resolutions and corresponding national laws. [If they wish, companies can list the countries from which they are sourced.] The seller hereby guarantees that these diamonds are conflict free and confirms adherence to the WDC SoW Guidelines.

WDC president Stephane Fischler says the group had long wanted to strengthen the system of warranties (SoW), the voluntary system that backs up the Kimberley Process.

The Kimberley Process is designed to weed out conflict rough from the main supply chain. It has the force of law and is administered by governments. Yet, illicit diamonds can still sneak into the supply chain as a piece of polished. And since there is no KP for polished, the warranties were designed to square the circle.

But some complain those warranties have never been strictly policed. They are supposed to be checked every year by an independent auditor. But many in the industry seemingly view them like those license agreements that people sign when they download software. They know they are there, but they don’t really consider what they are agreeing to.

Yet, when a dealer stamps a warranty on an invoice, it carries weight—just like it matters when people click okay to terms of service. Everyone who stamps those words on an invoice is warranting that what they are saying is true—just like if an invoice says a parcel contains diamonds, it can’t contain CZ.

“A warranty does have a certain level of enforceability,” says Cecilia Gardner, the former World Diamond Council general counsel who is now a legal consultant for the industry. “If the diamonds you are selling do not meet the Kimberley Process standards and you include that warrant, you can be sued.”

Fischler adds that while individual governments may differ on how they view the warrants, diamond groups take them seriously.

“It’s no different than any other commitment a supplier makes to a customer. If a customer can prove there is a breach, it is up to the bourse to mediate.”

All that said, we don’t know of any cases of anyone sued, or even taken to a bourse arbitration, for a faulty warrant.

Which brings us to new language. It is meant to be more than just a “ticking exercise,” says Peter Karakchiev, head of international relations for Russian diamond producer Alrosa and a WDC board member.

“The system of warranties is no longer just a statement on the invoice,” he adds. “It is now a set of guidelines,” which incorporate internationally recognized standards on human and labor rights, anti-corruption, and anti–money laundering. Those standards are “the norm for any company in the 21st century,” he adds.

Next year, the WDC will release a tool kit that will let traders and dealers self-assess their compliance with the guidelines.

The tool kit, which is being developed collaboratively with inside and outside stakeholders, is meant to give industry members “clear guidance on how to act,” says Karakchiev. It’s also meant to be used by every member of the trade, whether they are part of a big or small company. “If you’re Alrosa, you have a whole department to handle this. If you’re a one-man company, you will just want a one-page document.”

Nongovernmental organizations (NGOs) had two main complaints with the new system, which roughly correspond to their complaints about the old one. The first is that the system is voluntary.

The WDC says it had no choice in the matter. “We are not the government,” says Karakchiev. “We can’t police anybody. We can just encourage people to use the warranties.”

Fischler feels that, given the entire industry regularly uses the old warranties, it will likely soon adopt the new language, too. “The prior warranties became the norm on every invoice. Financial institutions will not honor an invoice that doesn’t contain those warranties. With time, they will look for these new warranties, too.”

Gardner agrees that “in effect, the system is mandatory. In today’s market, very few people are willing to buy diamonds that are not warranted in this manner.”

But NGOs also gripe there is no verification mechanism. Joanne Lebert, executive director of IMPACT (formerly Partnership Africa Canada), one of a group of NGOs that issued a statement critical of the new system, complains that it still relies on “self-assessments” and “self-declarations.”

“What is needed is independent third-party auditing of those statements,” she says.

Lebert also feels the industry puts too much stock on provenance, when it needs to switch its focus to due diligence.

“Due diligence is not a reliance on certification. It’s about progressive improvement. It’s not black and white. You do your research and engage to improve the situation.”

Most due diligence standards, including the OECD guidelines for responsible business conduct, require independent auditing, she says.

Karakchiev argues that due diligence is beyond the WDC’s mandate, which is to support the Kimberley Process. But he says that due diligence is part of the chain of custody standards developed by the Responsible Jewellery Council, which do require independent audits. Verifying completion of the WDC self-assessment tool could also be part of a due diligence program, he says.

Gardner sees the new language as “more of an educational effort…. The WDC is trying to educate members on what is a credible supply chain for diamonds.”

So if the new language is widely adopted by the industry, and if industry members complete the self-assessment tool, and if they then use that guidance in their daily business, this change could make a difference. But that’s a lot of ifs. The question is: Will people in the industry take these new obligations seriously or just continue to stamp mindlessly?