JCK recently reported on the reemergence of the jewels of antiquity serving as an inspiration point for independent designers. As editor-in-chief Victoria Gomelsky notes, “The combination of genuine antiquities—be they Roman coins, Phoenician beads, or antique amulets—with karat gold sends a powerful message about jewelry’s ability to protect, inspire, communicate and, above all, endure.”

For Victoria Strigini, a French, London-based jewelry designer, intaglios—precious or semiprecious gemstones that have been incised with portraits, anima motifs, mythological figures, or scenes—are the thing she’s into at this precise moment, having built her line around on the adornments and artifacts of the ancient world, from Greek and Roman coins to Medusa-head signet rings.

“Classical gemstones have been around for more than 2,000 years—that alone is magical,” she says. “Imagining all of the hands that they have passed through and then owning one of these treasures essentially inserts you into its history, which again is truly wonderful. It’s like a never-ending story.”

To create the intaglios, gemstone engravers used simple mechanical hand tools with abrasive powders such as emery to carve into the stones. The quality of the carving, as well as the type and size of the gemstones, were key factors in determining their worth (and still are).

And as Strigini explains, intaglios were not simply decorative—in their day, they served a very practical function. For example, they were set into rings for use as seals to authenticate important documents. “The design was carved in a mirror image, to produce an impression the correct way when pressing the ring into wax or clay,” she says.

The designer sources the intaglios she uses from specialty gem dealers and through auction houses. “I like the hunt, it’s the most exciting part,” she says. “I’m kind of addicted. It’s like constantly discovering new artists, just in a different form.… Each stone also invites a different [design] treatment [in jewelry] too, so I enjoy the experimentation phase that comes with a new antiquity acquisition.” 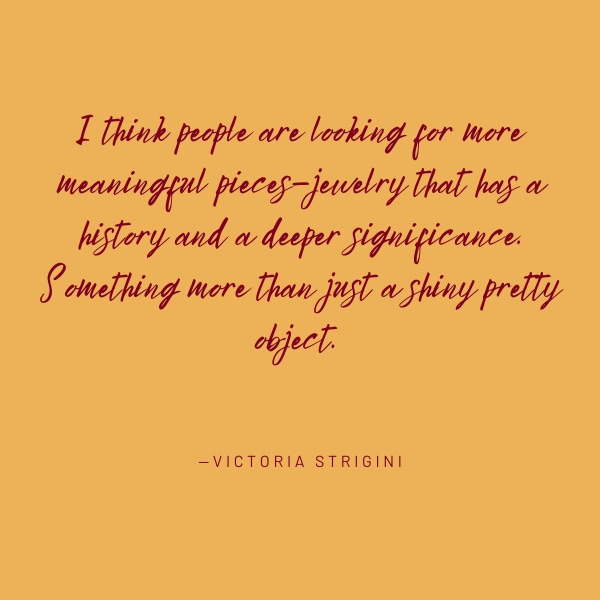 Reverence for the stone’s original creation process and unique provenance is always top of mind when she’s working.

“I don’t alter intaglios or gemstones in any way; in my opinion, to do anything to them would be disrespectful to the artists who carved them so I treat them with integrity,” says Strigini. “Unfortunately—but luckily rarely—gemstones can always crack or chip when they are set, whether they’re classical carved intaglios or faceted gemstones. This is usually because there is a weakness in the crystal structure. This is always heartbreaking…it doesn’t happen often but you have to just accept that it’s a part of its history. And there are solutions such as filling the chip with melted gold, which can then be engraved to complete the carving.”

Meanwhile, her passion for intaglios has built the groundwork for other designs that embrace a modern antiquities theme, including a new online program that allows customers to choose a pre-sourced Greek and Roman coin from a catalogue and have it set in a silver signet ring. Sounds pretty money to me!