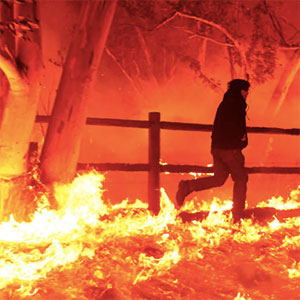 But no one could have predicted that the fire would travel 14 miles north in only five hours, lighting up the pitch-black early morning with vertical walls of flames that engulfed Ventura’s steep hillsides.

While residents rushed to evacuate, Fox’s parents, who are in their eighties and live a short distance from their daughter, ran down a hill to her house, still dressed in their pajamas. “I woke up and saw that the entire hill was in flames,” Fox recalls.

The family was lucky—neither home was lost. After a trip to the hospital to treat Fox’s mother, who has a heart condition, they hunkered down on the floor of the jewelry store to sleep, their valuables locked in the store’s safe.

The next they discovered that nearly every other home on Fox’s parents’ road had been burned to the ground. 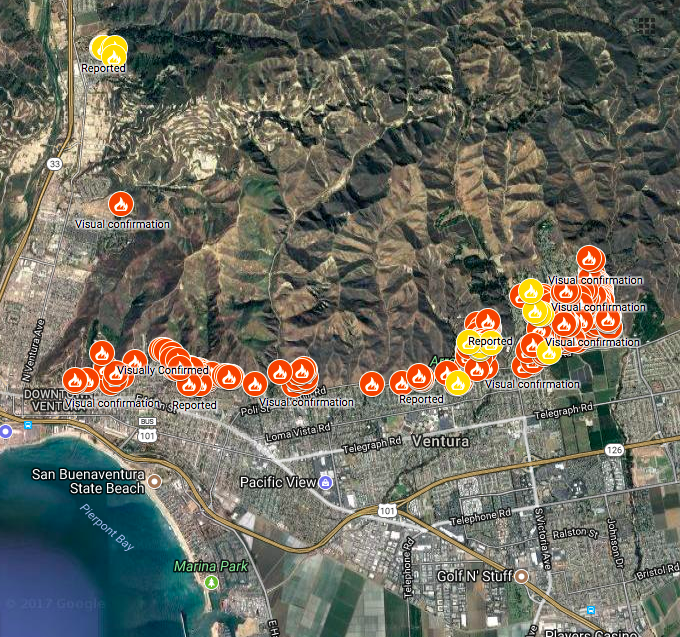 “The fact that no one died is just unbelievable,” says Fox. “So many houses are gone.”

The retailer opened her store for the first full day of business on Saturday, after attempting to open both Thursday and Friday, but ultimately closing both days because of the smoke “that made it almost impossible to breathe sometimes.”

The Thomas Fire, which has impacted both Ventura and Santa Barbara counties, has consumed an area larger than the size of New York City this past week, burning over 800 buildings—most of them homes—in its pitiless path across approximately 230,000 acres.

And while other fires in the region that started Monday, Dec. 4, have largely been contained, according to multiple reports, Thomas is still burning, creeping northward today. Just last night, residents in parts of Carpinteria close to Los Padres National Forest (about 100 miles northwest of L.A.) were issued a mandatory evacuation order.

The jewelers I talked to for this story were, like Fox, still getting their bearings following the fire, and are presently more concerned with whether or not their neighbors have a place to sleep than how the tragedy will impact their business in this crucial sales season. But they know they’ll be grappling with those realities in the coming days.

Donna von Hoesslin Pu’u, owner of Ventura store Betty Belts, which specializes in handmade jewelry created with beach glass and other nontraditional materials, was another lucky one.

She evacuated to Morrow Bay, Calif., with her husband and two cats early in the week—assuming her home would be burned to the ground—but returned to Ventura last week to an intact store and home.

“The fire came within a block of our house,” she reports. “I even said goodbye to my house before I left.” 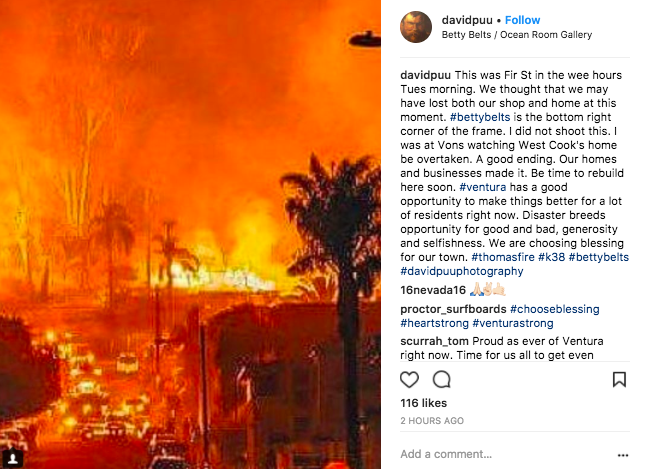 Betty Belts lost three days of business, but an employee took it upon herself to ship out orders from her home. “She was kind of a hero,” the retailer says. “She just wanted to be proactive and keep working.”

Natasha Berezovska, manager of Joseph’s Fine Jewelers in Macerich-owned Pacific View shopping center, closed the kiosk with the mall Tuesday and Wednesday. But she had to remain closed on Thursday because there weren’t enough employees to work the large kiosk.

“A lot of employees were displaced and the owners had evacuated their home—it was partially burned,” she says, adding that the smoke was “so thick inside the mall, it was just unbelievable.”

An employee at Kay Jewelers in Pacific View, who asked to remain anonymous, also reported that the smoke in the mall “was so, so bad,” but said this past weekend brought a return to normalcy. Shopper traffic, he said, “is pretty much back to normal.”

Both Fox and von Hoesslin Pu’u say the response to the event, from locals and those outside the community, has been overwhelmingly generous.

“Everyone’s been amazing,” says von Hoesslin Pu’u, who was putting care packages together Sunday night for people who lost their homes; included in each package were a signature pearl-and-beach glass necklace and a store gift certificate. “The restaurants are feeding people in town and everyone’s helping as much as they can.”

Fox says she can’t predict how the tragedy will impact her business yet, but reports that she’s had an influx of customers looking to replace lost jewelry.

The retailer is also giving away (while supplies last) a custom sterling silver necklace, featuring the city of Ventura’s logo studded with a single diamond, to residents who lost their homes.

The retailer says she’s been touched by the way her community’s rallied to help residents.

On Saturday, a young woman who Fox says “definitely does not have a lot of money” was in the store at the same time as a couple who lost their home. After the couple shared their sad story, the young woman walked over to them and handed them $100.

“Most of these people whose homes were lost were living in very expensive houses,” Fox explains, “and here is this woman trying to help them. The woman who took the $100 said, ‘I’m going to pay it forward with this.’ It was just an incredible thing.”

Donate to the Thomas Fire Fund

United Way of Ventura County is accepting monetary donations for its Thomas Fire Fund online and through text (you can text UWVC to 4144 to donate).

The American Red Cross of Ventura County has set up three shelters in the region; they’re accepting donations online, by phone at 800-733-2767, and via text (you can text REDCROSS to 90999 to donate).

(Top: A man in Ventura rushing to save his cats in his mobile home, image via: @latimes)