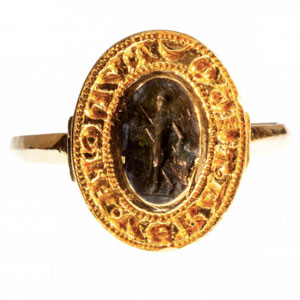 In 1979, Tom Clark dug up a gold ring in Buckinghamshire, England, after it set off his metal detector. Soon after, he put the jewel in a metal tin and forgot about it. For 40 years.

Now 81, Clark has discovered that the gold seal ring, which he rediscovered recently in a jumble of items his mother once owned, is a medieval artifact dating back to 1350. And The Telegraph reports that the 670-year-old ring is expected to fetch between £8,500 and £10,000 (roughly $10,429–$12,270) when it goes up for sale at Hansons auction house in Derbyshire on Aug. 27.

The news website detailed that Clark actually took the ring to a museum to have it looked at in 1979 and was told it was “fairly modern.” But when he found it again 40 years later, he had the good sense to get a second opinion. He told The Telegraph, “A few months ago, I was sorting through some stuff in my own garage that had come from my mother’s house and there it was—the tin with the rings in it.”

Since 1979, Clark’s gained more knowledge about antiquities and said when he rediscovered it, he pegged it as being an accoutrement belonging to someone important in the 1300s. “It’s rare and elegant,” he told the outlet. “I’d love to know who it belonged to.”

Inside the ring is an inscription: a Latin phrase that translates as “I hide the true message,” and according to the auction catalog, the piece has a “possibly semiprecious intaglio setting.” More specifically, set into the middle of the bezel is an intaglio “of dark green coloration—possibly chalcedony, and likely to be of Roman date.”

We’ll update this story Wednesday with the final selling price of the ring!

Top: The ancient intaglio ring, which would have been worn by an important person in the 1300s (photo courtesy of Hansons Auctioneers)