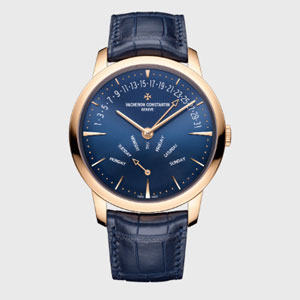 The forthcoming 4,500-square-foot boutique—at 28 E. 57th Street—will be around four times the size of the brand’s current New York City shop, which is located at 729 Madison Ave. According to a press release from the watchmaker, the shop will have a two-story glass facade and, somewhere, a massive Maltese cross—the firm’s signature motif.

Vacheron Constantin is owned by luxury conglomerate Richemont, which also owns Cartier, Buccellati, and Piaget, among other top-flight watch and jewelry brands. According to the New York Post, it’s been common knowledge in New York City real estate circles that Richemont had leased the space on 57th Street—but no one knew which of its brands would be moving in.

The mystery is finally over—and Vacheron CEO Louis Ferla said in the same press release, “A new flagship in New York City is the perfect opportunity to further develop the long-lasting relationship of our maison with its American clients. With this new location we seek to offer our clients the best space and the best location for exclusive services and amazing experiences.”

He added, “Vacheron Constantin has been present in the United States since 1817 and has created numerous timepieces specifically for the American market, from the famous Corps of Engineers pocket watches to the American 1921 wristwatch…. Vacheron Constantin also has a rich history of developing bespoke creations for American collectors and connoisseurs.”

The watch brand has 32 U.S. retail doors, including several sleek namesake boutiques in cities including Las Vegas and Beverly Hills, Calif. Vacheron Constantin’s two largest markets are Asia, where it’s in 126 doors, and Europe, where the brand is carried in 113 retail locations, including its own mono-branded boutiques.