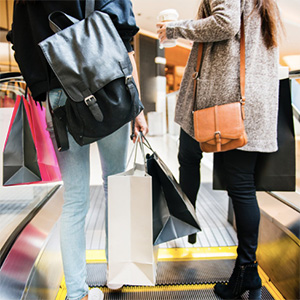 U.S. retail sales declined slightly in April, according to a Commerce Department report released this morning.

Advance estimates of U.S. retail and food services sales for April totaled $513.4 billion—that’s a decrease of 0.2 percent from the previous month, but it’s still 3.1 percent above April 2018’s total.

Retail trade sales were down 0.2 percent from March 2019, but were still 2.8 percent above those of March 2018. Non-store (online) retailers were up 9 percent from April 2018, while sporting goods, hobby, musical instrument, and book stores were down 8.5 percent. Car sales dropped 1.1 percent, and sales at electronics and appliance stores dipped 1.3 percent. Clothing store sales dropped 0.2 percent; home and garden supply store sales fell 1.9 percent.

The results show that Americans are cutting back on spending in several areas. But with job growth and unemployment numbers at peak levels (unemployment fell to a super-low 3.6 percent in April), it’s been tough for economists to get a hold on how and why consumers are reining it in.

Lower than expected tax returns may be a contributing factor. As of March 29, total tax refunds were about $6 billion lower than over the same period in 2018, according to the Washington Post. And though it’s a modest figure for an economy as huge as America’s, “that modest reduction is not evenly spread across the population,” according to New York magazine’s Intelligencer. “Many Americans are seeing slightly higher tax refunds than in the past. But 1.6 million other Americans…are discovering that they actually owe the government money this time around. And the impact of more than one million Americans experiencing a sudden, sharp decline in their anticipated purchasing power has proven far greater than that of a much larger group of taxpayers seeing modest gains.”

And there are other speed bumps ahead—chief among those is the impending fallout from Trump’s new, sky-high tariffs on Chinese imports. Consensus says that consumers will see hikes in the prices of goods as a result of the Trump administration’s tariffs on $300 billion in Chinese products that were announced May 9.

JCK’s Rob Bates reported yesterday that jewelry manufacturers, who have been largely unscathed by tariffs in the recent past, will see a raft of everyday jewelry components levied significantly under the new rules. Among the components are natural and cultured pearls, diamonds, stones including rubies, sapphires, and emeralds, silver jewelry, gold necklaces, and synthetic gemstones.

And, in every category the burden of those added costs will land like a brick on the consumer, say economists. “The tariffs are a stealth tax on American businesses and consumers,” Mark Zandi, chief economist at Moody’s Analytics, told the Financial Times in a story published this morning. “American consumers will be on the front lines of the trade war.”

The tariffs could also impact financially fragile retailers and shopping centers—widespread closures of which will have a trickle-down negative effect on retail sales and jobs. Financial analyst Jay Sole told Retail Dive yesterday that the tariffs could “imperil retailers to the tune of $40 billion in sales and 12,000 stores in just one year.”