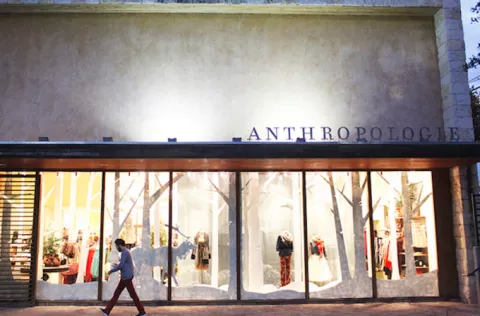 Richard Hayne, CEO of Urban Outfitters—which also owns Anthropologie and Free People—told investors on the company’s fiscal fourth-quarter earnings call yesterday that he’s not looking to expand any of the company’s concepts.

Retail businesses that overbuilt their store presence in the 1990s, he said, are now seeing “doors shuttering and rents retreating.” He added, “This trend will continue for the foreseeable future and may even accelerate.”

The effect of brands committing too much square footage to retail, Hayne said, “created a bubble. And like housing, that bubble has now burst.… It makes little sense to enter into many new, long-term leases at this time when all signs indicate that a similar lease will be less expensive in the near future.”

The retailer operates approximately 200 Urban Outfitters and Anthropologie locations in the United States and nearly 130 Free People shops. Last year, the company announced it would open 26 to 29 new stores in North America this year, but it has since scaled that plan back to 15 new stores in 2017.

The company posted a weak earnings forecast for the fiscal first quarter, which resulted in a nearly 5 percent decline in Urban Outfitter’s shares on Wednesday.