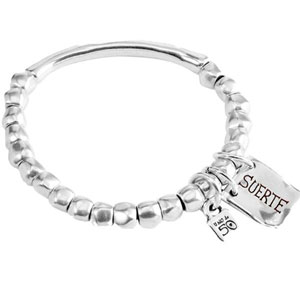 UNOde50 is in growth mode. The Madrid-based handcrafted silver jewelry brand tells JCK it plans to add four new branded stores to its portfolio of retail stores this year.

The vertically integrated company will open stores in three major airports (Seattle-Tacoma; Charlotte, N.C.; and Salt Lake City) beginning in April. And in August it will bow its first Caribbean location—a stand-alone store in the Dominican Republic.

McNary, whose former roles include a stint as president of cult-favorite fashion line agnès b., says the brand’s been undergoing a transformation over the past three years that’s resulted in a readjustment of its overall strategy. “We’ve come back and decided that the normal channels of business and commerce have [expanded],” he says. “There are much more than the three traditional channels now, and we’ve started to look at e-tailing, travel retail, and other avenues.”

The company opened a franchised store in Panama earlier this year, and in 2019 opened five shop-in-shops in Mexico. “That market—the South American and Central American market—is a really a big growth opportunity for us,” McNary says, adding that the brand is currently vetting retail opportunities in Colombia and Bogotá.

Warmer, beach-adjacent locations have been the brand’s sweet spot, McNary adds, no doubt due to its handmade, sophisticated-bohemian aesthetic. “Our largest market is California, then Florida,” he says. “And in Latin America, I think the Spanish heritage is a selling point for people.”

The CEO says he’s been studying airport retail for roughly three years and notes that the division is “very strong” for the brand. “We see [travel retail] as a way to market the brand and get it in front of new consumers. But it’s very important for us to select the right locations. We’re going after high-traffic airports. We’re also looking at [airport] destinations that fly to…our strong markets,” he says.

McNary says the business vision for UNOde50 is about creating and marketing a brand that feels timeless, while still being niche enough to feel special. It’s a point of pride for the brand—and a huge selling point for its fans—that every single piece is 100% handmade in the company’s Madrid manufacturing facility.

“We’re not chasing things off of a catwalk, we’re following a creator’s mission,” McNary says. “And we’re hoping to introduce people to the brand who have a love and respect for art. I think this is very important positioning for us as a brand.”