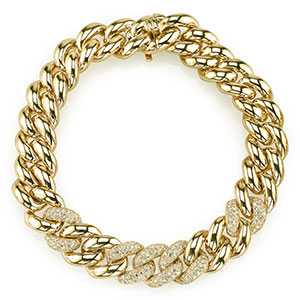 U.S. gold jewelry sales rose only 1 percent in the first quarter of 2019, a result of the prolonged government shutdown, the World Gold Council (WGC) announced in its quarterly “Gold Demand Trends” report.

This was the ninth consecutive quarter that U.S. gold jewelry sales have showed year-on-year growth, although the 1 percent amount is less than the 4 percent recorded in the final quarter of last year.

The report says that “the prolonged government shutdown hit demand in January, as demonstrated by a drop in gold jewelry imports that month.”

It did point to a few bright spots in the U.S. market.

But the numbers weren’t as good from mass-market retailers, which are “less resilient,” according to the WGC report.

On the other hand, low-end gold sales were helped because “the challenge to gold from branded silver and costume jewelry is fading, which bodes well for demand,” it said.

The report did express concern for the wedding market, “where platinum and base metals are encroaching on gold’s position as the metal of choice for men’s wedding rings.”

Worldwide gold jewelry demand rose 1 percent in the first quarter of 2019, to 530 tons. First-quarter sales in India soared 5 percent, helped by lower prices, which coincided with the wedding season, traditionally a heavy time for gold jewelry purchases. That is India’s best first-quarter number in 2019. However, sales in China dropped 2 percent, hurt by a slowing economy and international trade frictions.

The United States is the world’s third-largest gold jewelry market.

Overall gold demand grew to 1,053.3 tons in the first quarter of 2019, up 7 percent from last year. The increase was largely due to continued growth in purchases from central banks and gold-backed exchange-traded funds.