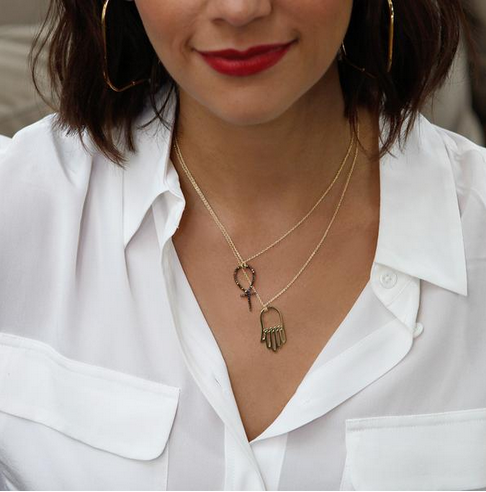 The ankh symbol—a simple cross with a looped top—appears in the hand of almost every deity and pharoah depicted from ancient Egypt. But the elegant ankh, which symbolizes life and afterlife, dates back even earlier—to Mesopotamia and Persia.

Fast-forward to 2017, and the ancient hieroglyph, which enjoyed style heydays in both the 1960s (courtesy of the hippies) and the early 1990s (when it became a hallmark of “grunge” style), has made its way back into the fashion sphere.

Beyoncé helped kick off the trend last year when she wore a hammered gold ankh pendant while (expertly) railing against a cheating husband in the film-length video to her new album, Lemonade. Katy Perry and Erykah Badu have also donned ankh jewelry—Perry recently had the symbol painted on her nails.

But among ankh-wearing celebs, Rihanna’s fallen hardest for the beautiful, spare symbol.

Rihanna in her “everyday” ankh (photo courtesy of Instagram/@badgalriri)

Actress Rashida Jones, another ankh superfan, launched a jewelry collaboration with online jeweler Iconery in November that features the symbol, among other ancient talismans, including the hamsa. The line includes hefty gold ankh rings and an ankh pendant studded in black diamonds.

“Things have gotten so dainty in terms of fine jewelry,” Jones told WWD. “I wanted a return to ’70s, ’80s bold, iconic symbols.”

Jewelry that feels personal—namely, initial and monogram jewelry—has been huge in recent years. And one could argue that symbols like the ankh—that honor life, death, and other heady matters—are an evolution of the same desire to wear jewelry that’s deeply meaningful.

And was there ever any doubt that a symbol that stands for afterlife would get a second (and third and fourth and fifth) hurrah? No chance.