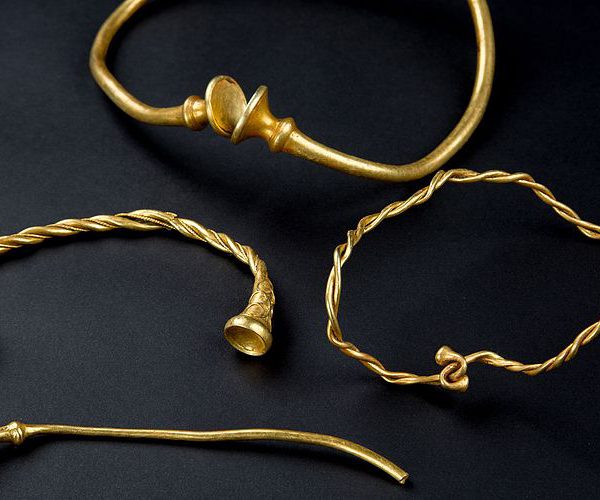 Two English pals found the necklaces and bracelet in a field

Two English treasure hunters armed with metal detectors hit the jackpot recently—finding several gold jewelry pieces in a Staffordshire field that could be as much as 2,500 years old.

The haul—currently on display at the Potteries Museum and Art Gallery, in Stoke-on-Trent, near where the pieces were found—reportedly includes three necklaces and an 18k gold bracelet, believed to have dated from the Iron Age.

“This unique find is of international importance,” Dr. Julia Farley, curator of British and European Iron Age Collections for the British Museum, said in a statement. “It dates to around 400 to 250 B.C., and is probably the earliest Iron Age gold work ever discovered in Britain. The [necklaces] were probably worn by wealthy and powerful women, perhaps people from the continent who had married into the local community.”

One of the treasure hunters, Mark Hambleton, said that he and friend Joe Kania have scoured the local farmland for a long time, to little avail.

“We have found the odd Victorian coin, but mostly it has just been junk,” he told The Sun. “Joe said to me, ‘I think I’ve found something a bit special,’ and he was dangling it in front of my face. That’s when I started to get a bit dizzy and weak at the knees.”

But it looks like they discovered all there is: Following the find, a team scoured the farmland but didn’t dig up anything else.

The Staffordshire government says it’s working to house the finds permanently at the Potteries Museum.