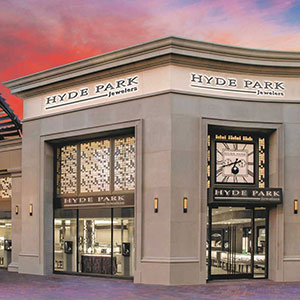 Hyde Park Jewelers, based in Denver, acquired Traditional Jewelers in 2012. Two years later, Hyde Park expanded the store from 4,000 square feet to 10,000 square feet and moved it to a different location within the Fashion Island shopping center in Newport Beach.

“The intention is to unify the brand,” he says. “From the standpoint of our clients, we have a growing footprint in the western United States, and it’s important for us to communicate with one voice.”

Hyde Park Jewelers now comprises seven stores. Three of those stores—in Denver, Phoenix, and now Newport Beach—bear the name Hyde Park. It also owns four monobrand boutiques: It has stores devoted to Rolex, Breitling, and Roberto Coin in Denver, as well as a Rolex boutique at the  Forum Shops at Caesars Palace in Las Vegas.

At the end of November, it will open three more monobrand boutiques at the new luxury wing of the Scottsdale Fashion Square in Scottsdale, Ariz. Those stores, all adjacent to each other, will be devoted to watch brands Breitling, Hublot, and IWC Schaffhausen. At that time, Hyde Park will number 10 stores in five cities and four states.

In addition, Hyde Park is renovating its Denver flagship. Part of its current space will be occupied by a Rolex boutique; the other part will be devoted to a new millennial-focused concept store called Engage by Hyde Park, which will sell only engagement rings and wedding bands.

Traditional Jewelers was founded in 1975 by Marion Halfacre, who purchased the store after answering an ad in JCK. Halfacre, who was active in numerous industry groups, grew the jeweler into what one local newspaper called a “city icon.” He died in 2007.