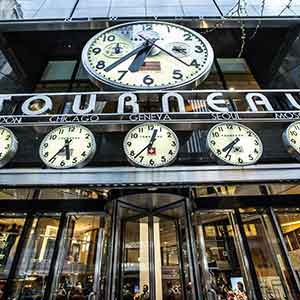 The 28-store New York City–based retail chain had been previously been owned by Green Equity Investors, an affiliate of Leonard Green & Partners, which purchased it in 2006. Reports that 118-year-old Tourneau was up for sale first surfaced last year.

Founded in 1888, Bucherer is based in Lucerne, Switzerland, and is a company still controlled by its founding family. It owns the Carl F. Bucherer watch brand, the Bucherer Fine Jewellery line, and 72 retail stores across Europe, 33 of which are under the Bucherer name.

Having Tourneau change its name to Bucherer is “a possibility we are looking at,” says Jörg Baumann, a director of marketing and business development for Bucherer.

The company also wants to have Tourneau, which is primarily considered a watch retailer, feature the Bucherer jewelry brand, though Baumann admits “it will take time to develop that business.”

Baumann says Tourneau will continue to feature products from a variety of companies, as Bucherer’s retail chain stores do.

“The current management is staying on,” Baumann says. “We are happy about that. It ensures continuity, which is in the DNA of our company.”

He adds the purchase was attractive to Bucherer as it gives it access to the United States.

“The U.S. is a really important global watch market,” he says. “Anybody who has a larger vision wants a footprint there. We feel we were a good fit for Tourneau. We use a lot of the same distribution, a lot of the same brands that we operate in Europe. The whole thing was logical.”

Read more about Tourneau’s vision of the industry landscape from CEO Ira Melnitsky in an interview conducted by JCK last year.