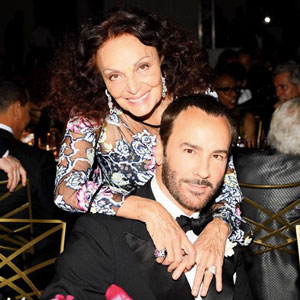 Fashion designer Tom Ford took over for Diane von Furstenberg as chairman of the Council of Fashion Designers of America (CFDA) earlier this year, and already he’s making some major changes—including a few that address long-standing criticism that the organization’s leadership doesn’t represent the industry’s rich diversity of cultures and perspectives.

The organization announced this week that Ford has shifted four CFDA board members—Marchesa’s Georgina Chapman, Rag & Bone’s Marcus Wainwright, and jewelry designers Kara Ross and Mimi So—to “nonvoting emeritus status.” That status is shared by a who’s who of fashion and jewelry designers, including David Yurman and Marc Jacobs.

“Lots of people voiced a concern that the board, and the CFDA, was not diverse enough,” Ford told WWD this week. “I’m rearranging the board so that it is more diverse in age and more diverse in every way.”

Many think Ford had few options in sidelining Ross, whose cohosting of a Trump campaign fundraiser last month in the Hamptons with her financier husband, Stephen Ross, resulted in a handful of CFDA member resignations (including jewelry brand Fallon’s Dana Lorenz) and prompted designer Prabal Gurung, among others, to boycott New York Fashion Week’s rumored future move to the Shed—a space in the new Hudson Yards development, in which Stephen Ross has a major stake. (Ford told WWD that the Ross’s political leanings had nothing to do with her being rotated to nonvoting status.)

Ford also told WWD that he wants to winnow the CFDA’s busy calendar down to two major happenings a year, and asserted that a smaller schedule “enables you to get better speakers. It focuses everyone. [The press] can’t write about what the CFDA is doing every two weeks, but you can, twice a year, focus on, ‘What’s happened since the last time the CFDA met? Where is it going?’ That’s part of this process of streamlining.”