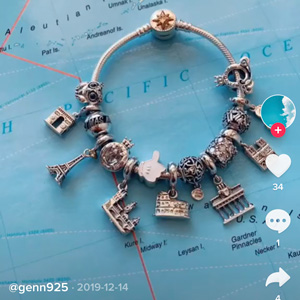 Would TikTok be taking over the world right now if we weren’t in the midst of a global pandemic that’s forced most of us to adopt an isolated, low-stimuli lifestyle?

We’ll never know, but it’s safe to assume its ascension wouldn’t have been as swift. And here we are. TikTok—an app you’ve been meaning to download for a year, but haven’t felt socially pressured enough to actually do it—taking over the planet.

TikTok was downloaded 315 million times from January through March, according to analytics company Sensor Tower, which amounts to the most downloads for any app ever in a single quarter. It now has two billion downloads (which is different than users), doubling its total from 15 months ago.

So if you’ve been actively trying to ignore TikTok as a marketing tool for your business, reasoning that it’s only for teens, consider that illusion shattered (so sorry!). Grab your phone and download it. Once you’ve done that, open the app and take a deep breath. Yes, it’s noisy, it’s busy, it’s chock-a-block with strange sights like grandparents twerking and Justin Bieber shaving his mustache. It’s a trippy, cacophonous, 24-hour dance and lip-synch party. Welcome.

But the hard part’s over. Now that you’ve taken this step, you can start exploring and then digesting just how brands are using the app to market to consumers. Here are a few good places to start:

@KylieCosmetics
You may not love (or even admire) Kylie Jenner, who’s part of the Kardashian-Jenner clan. But the TikTok feed of Jenner’s beauty company is a great one for viewing the different types of posts that perform well on the platform. There are posts with ambassadors singing to the camera, ones with the doll-like Jenner doing her own makeup (very, very slowly), and other oddly compelling posts including one where someone off camera is literally just tossing mounds of Kylie-branded makeup onto a bed while chanting “Kylie, Kylie, Kylie.” I mean, whatever works.

@FlightHouse
Flighthouse is a media company founded by a 20-year-old named Jacob Pace. The company produces Gen Z- and millennial-targeted content on a number of social platforms. But on TikTok it posts a series that shows influencers discussing trends, doing challenges (like the human jungle gym, where one person climbs the other), and playing trivia games. It’s a feed that really underscores that on TikTok you don’t have to (and should not) try to reinvent the wheel or strategize long, complicated content. How well content performs on the platform often boil down to how charismatic the person doing the talking/dancing/eating is.

@CharliDamelio
In true TikTok fashion, the feed with the most followers (52.7 million) on the platform is a 16-year-old dancer and content-making machine named Charli D’Amelio (the top 50 most-followed TikTok feeds are influencer feeds and many are teenagers). Even if you’re not a fan of hip-hop, bleeping video games, and teens making model-y faces into their iPhones, you should check out her feed for one reason: It’s full of memorable product placements. In a recent video, D’Amelio half-plays a video game and dances in her beanbag chair while waving around a huge Chick-fil-A soda cup.

@Nike
Sports are popular on TikTok—@NFL and @ESPN are among the platform’s most followed brands. And @Nike does a good job of creating content that’s sporty but also has mass appeal. Khris Middleton double dribbling is fun, an influencer dancing to celebrate Nike #AirMaxDay is entertaining, and artfully edited videos of soccer stars goofing on each other on the field offer some light escapism—the kind feel-good content TikTok does best.