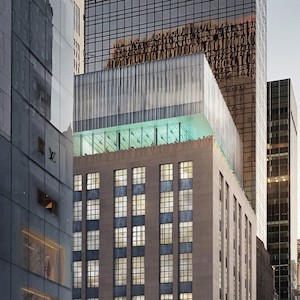 Tiffany & Co. will top off its famed New York City 57th Street flagship with a new glass-enclosed “exhibition, event, and clienteling space” when it reopens in spring 2022.

The top three floors of the 10-story building currently serve as office space. They will now morph into a two-floor glass building topper.

The first two floors will be used as an event space, which will include a new outdoor terrace that will give a guests a view up Fifth Avenue to Central Park. The top floor will be used for clienteling.

A Tiffany statement says this redo is the flagship’s biggest change since it opened in 1940—when it made waves for having one of the first central air-conditioning systems and a main floor free of columns.

The glass-enclosed floors are meant to have a “vertical continuity with the existing structure, while also setting it apart as a bold and innovative addition to the building,” the company said in a statement.

Construction on the local landmark, located at 727 Fifth Avenue, began in spring 2019. It was originally supposed to be completed in the fourth quarter of 2021. However, that‘s been pushed back to spring 2022, “due to the temporary halt of all nonessential construction activity in New York City and certain related matters in response to COVID-19,” it said in an 8-K filed on Aug. 20 with the Securities and Exchange Commission.

Since construction began, Tiffany’s flagship has moved to the space next door, formerly occupied by NikeTown.

The redo is being overseen by the Office for Metropolitan Architecture, led by partner Shohei Shigematsu.

Last year, luxury behemoth LVMH signed a deal that called for it to purchase Tiffany & Co. for $16 billion. That deal remains in progress.