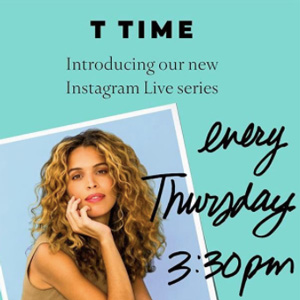 On Thursday, Tiffany & Co. announced the debut of a new Instagram Live series, T Time, featuring live takeovers every Thursday “by creatives and influential friends of the house.” The takeovers will focus “on messages of optimism,” with each live guest sharing what’s been inspiring them recently. Guests also plan to take live questions from Tiffany’s Instagram audience.

Instagram Live, which users access through Instagram Stories, allows people to stream live content. Though the platform’s been around since November 2016, it’s seen a huge surge in use and popularity in the COVID-19 era, as brands scramble to reach and engage homebound shoppers. Mentions of IG Live on other social platforms increased by 526% from March 8 to 15. TikTok, which has been a somewhat fringe social platform in the United States for years when compared to Instagram, has also officially arrived during the pandemic. The app is used by more than 26 million Americans and was downloaded by roughly 113 million App Store and Google Play users worldwide in February alone.

Tiffany’s new IG program is part of the marketing push behind Tiffany’s latest collection, Tiffany T1, which the brand bills as “a bold reinvention of the Tiffany T collection [that] celebrates our first connection: the one to ourselves.” The new collection features rings and bracelets depicting an east-west T shape rendered in beveled, knife-edge lines. Several styles include clusters of diamond pavé.

A new collection has arrived. Introducing Tiffany T1—an embodiment of strength, courage and optimism. With it, we celebrate our first connection: the one to ourselves. Tap to make an impact and discover more via the link in bio. #TiffanyT1 #TiffanyT

“The stones nest into each other evoking a honeycomb pattern,” Tiffany creative director Reed Krakoff said on the brand’s website. “This reduces the amount of metal, allowing for larger diamonds and therefore greater sparkle.” Prices start at $850 for the 18k rose gold T1 Narrow ring and ascend to $17,000 for the T1 wide Diamond Hinged bangle.