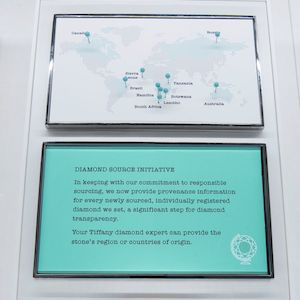 Tiffany & Co., which last year announced it was telling consumers the place and country where most of its diamonds were mined, is now taking that further by telling consumers where its gems are cut and set into jewelry.

The program laying out each piece’s “craftsmanship journey” will launch in October, and will apply to all its individually registered diamonds 0.18 carats and up. The company buys 80% of its rough direct from mining companies, and owns jewelry workshops in Belgium, Mauritius, Botswana, Vietnam, Cambodia, and the United States.

Tiffany did not make any executives available for an interview, but chief executive officer Alessandro Bogliolo told WWD that his company is uniquely positioned to offer this info since it’s vertically integrated.

“It’s something that cannot be easily replicated by competitors,” he said. “You have to put in a lot of investment and work.”

He said the program could provide a “huge” value for the company.

“It’s an incentive to buy,” he said. “I believe it can convince many customers to purchase a diamond instead of stepping away from it … It shows it’s possible to do the right thing—even in diamonds that are considered ethically nontransparent. This is really changing the standards of the industry.”

He said that consumers have shown greater interest in traceability in markets like Australia and even once-uninterested places like China.

The program takes “our commitment to diamond traceability one step further,” said Anisa Kamadoli Costa, chief sustainability officer, in a statement. “Our customers deserve to know that a Tiffany diamond was sourced with the highest standards, not only in quality but also in social and environmental responsibility. We believe that diamond traceability is the best means to ensure both.”

Last year, LVMH agreed to buy Tiffany for $16 billion—the largest deal ever in the luxury sector. That deal has been held up by the COVID-19 pandemic, which has delayed its expected approval by relevant antitrust authorities.