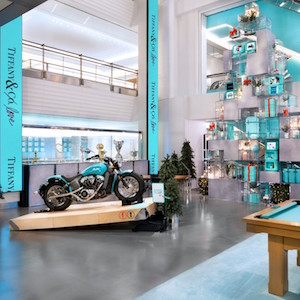 Tiffany & Co. reported that worldwide sales were flat in its third quarter (ended Oct. 31)—as the company got ready for its pending sale to luxury conglomerate LVMH.

Worldwide net sales came in at $1 billion, roughly even with the prior year. Comp sales were flat as well. On a constant-exchange-rate basis, net sales and comparable sales both rose 1% from the prior year.

“Our underlying business remains healthy with sales attributed to local customers on a global basis growing in the third quarter, led by strong double-digit growth in the Chinese mainland offset in part by softness in domestic sales in the Americas,” said chief executive officer Alessandro Bogliolo in a statement. “We are continuing to amplify the brand with the recent colorful extension of Tiffany T, the launch of the men’s collection, the unveiling of the Tiffany & Love fragrance pillars, and our ‘Very, Very Tiffany Holiday campaign.’ ”

He added, “We are very excited about the recently announced transaction with LVMH and, pending the required approvals, look forward to becoming part of the LVMH family of exceptional luxury brands.”

The sale means the company did not have its traditional conference call following the release of its results.

The company has also opened a new pop-up (pictured) that will exclusively feature products for men, which is located next door to the company’s flagship on East 57th Street in New York City. The pop-up will open on Friday and stay open through Jan. 6.

The shop will showcase six of the world’s most recognized sports trophies together in one location for the first time: the NFL Vince Lombardi Trophy, NBA Larry O’Brien Championship Trophy, MLB Commissioner’s Trophy, PGA Tour Players Championship Trophy, USTA Men’s US Open Trophy, and MLS Philip F. Anschutz Trophy. All were, of course, designed by Tiffany.