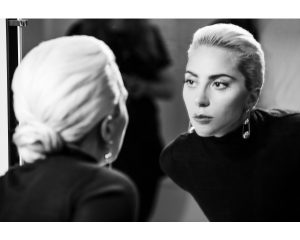 Strauss says the ad, touting the new Tiffany HardWear collection, will air just once, though it will live on the retailer’s site and across its digital and social channels. No other promotional activities with the performer are planned.

A statement noted that while Tiffany has never run a Super Bowl ad, it has designed the Vince Lombardi Trophy, which is awarded to the Super Bowl champion, for the past 50 years.

Tiffany HardWear is a new necklace, ring, earring, and pendant collection, based on a unisex bracelet from 1971 found in Tiffany’s archives.

“This campaign celebrates Tiffany’s rich legacy and the modernity of Tiffany style,” said Caroline Naggiar, Tiffany’s chief brand officer, in a statement. “Lady Gaga, and her originality, creativity, and courage, reflects the spirit of this collection.”

The campaign was creative-directed by Tiffany’s in-house team in partnership with Grace Coddington and shot by David Sims.

The actual ad will debut during the big game, but here’s a preview: