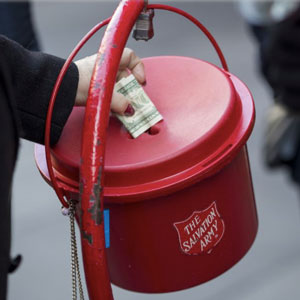 An unknown woman slipped a fistful of valuable fine jewelry into a red Salvation Army donation bucket in Annapolis, Md., last week. Capt. Ryan Vincent, commander of the Salvation Army in Annapolis, told local newspaper the Capital Gazette that the woman dropped a ring and two bracelets into the bucket outside the Festival at Riva shopping center, said “Merry Christmas,” and walked away.

One of the bracelets was a yellow gold Tiffany & Co. style that was valued at $6,000 by a jeweler and was sold for $1,500 worth of donation money.

The ring and second bracelet are a matching set that feature diamonds and rubies. According to the news outlet, their value is being determined by a gemologist. Pearl Eldridge, the bucket ringer who saw the woman put the jewelry in the bucket, called the woman a “quiet spirit.”

It’s not the first time someone’s put fine jewels in those famous holiday buckets. It happens on occasion. And while such donations are accepted immediately, if a person makes it clear that they are intentionally donating their jewels, the nonprofit has a protocol in place for when jewelry winds up in the bucket, but the bell ringer didn’t see it happen. In that case, the jewels are placed in a safe for 30 days before they’re sold, in the event that a piece of jewelry accidentally fell off or the gems were stolen.

“We do a bit of background digging before we sell everything off,” Vincent told the news outlet.

Salvation Army donation buckets in other parts of the country have also seen real gold donations this season. The Associated Press reported that a $1,500 gold bar was dropped into a donation bucket in Prospect, Ky., last weekend. And an anonymous donor slipped a 1915 100 Corona Austrian gold coin valued at around $1,500 into a red kettle in Nobleville, Ind., last week.