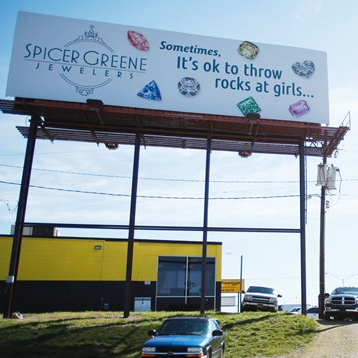 Spicer Greene Jewelers in Asheville, N.C., is finding itself at the center of a controversy over a billboard it’s currently running that features colorful gemstones floating around the phrase, “Sometimes, it’s ok to throw rocks at girls…”

The billboard, which went up last week in the progressive mountain town, has been accused, both online and in the press, of normalizing and promoting violence against girls and women.

Fast Company tweeted a photo of the billboard with the caption, “Least creative thing of the day: This billboard urges you to ‘throw rocks at girls.’” 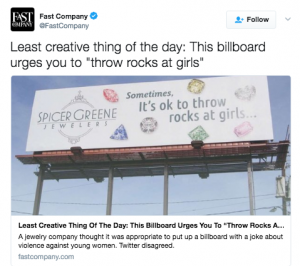 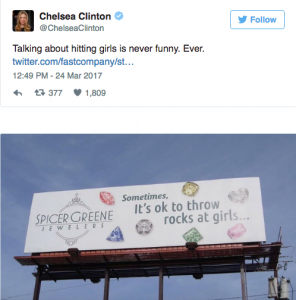 WLOS, the local ABC affiliate in Asheville, reported yesterday that a small protest took place Sunday in front of the store, with around 15 people holding signs with messages including, “Violent words lead to violence. Don’t shop here.”

The apology sounds heartfelt, but it seems to be for optics only—the billboard is still standing. 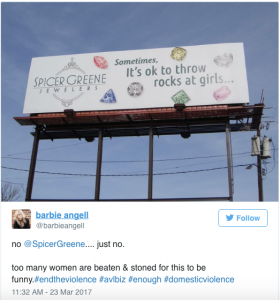 The jewelry retailer could not be reached for comment this morning (the store is closed Mondays and the message did not include an option to leave a voicemail), but reports indicate that Spicer Greene Jewelers changes its billboard every four weeks.

Comments under the retailer’s apology on Facebook range from folks defending the billboard’s message (phrases like, “Buck up, Snowflakes” abound) to those disturbed that the jeweler would fail to make the connection between throwing rocks in a presumably fun way and true violence against women.

“No offense taken!” wrote one Facebooker. “It’s a crazy world when you can’t take things at their heart and with a smile. Throw those ‘rocks’ at me anytime.”

Another wrote, “Just words…put your money where your mouth is and donate to a shelter for abused women.”

Using girls instead of women in an ad from a company that clearly targets grown-ups was presumably meant to conjure images of little boys mistreating girls they “like” on the playground, an outdated construct some critics of the ad quickly decried.

“Normalizing and finding humor in the, ‘He hit you because he likes you’ mentality that we feed to children is not ok,” wrote Facebook user Shannon Page in a post that garnered hundred of comments. “Small steps like this lead to a culture of violence against women. Also, children will not see the humor in this billboard. All they will see is, ‘It’s ok to throw rocks at girls.’ “

At best, the billboard is a tone-deaf piece of marketing—created by individuals who are insulated from the angst many Americans are currently feeling over how to protect the nation’s most vulnerable citizens, including women in domestic abuse situations, if and when government protections for them vanish under the Trump administration.

The apology was a great first step, Spicer Greene. So why is the billboard still up?