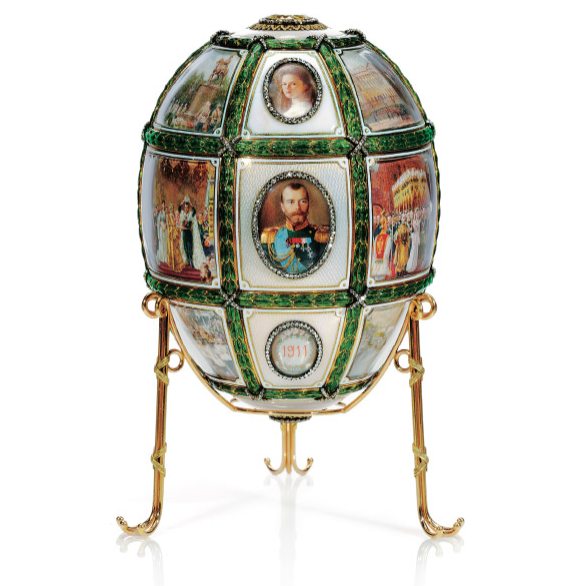 Earlier this month, I returned from a week-long family vacation to St. Petersburg, Russia. My twin sister, Julia, and I were born in the city in the summer of 1973, five years before our family emigrated to the United States. This summer marked the Gomelskys’ long-awaited return.

Our days—longer in this far-north part of the world during the “White Nights,” a period from mid-June to mid-July when the sun never sets low enough on the horizon for the sky to truly get dark—were packed with sightseeing, while our nights were taken over by epic meals fueled by a steady stream of vodka and wine. We admired the malachite vases of Catherine the Great in the Hermitage and the mythical paintings of Ilya Repin at the Russian Museum. We cruised through St. Petersburg’s picturesque canals—a network of watery arteries that have earned the city comparisons to Venice and Amsterdam—and watched the opening of the bridges along the Neva River, a nightly spectacle designed to allow big ships to pass.

We visited the utilitarian (bordering on grim) Soviet-style building where my family lived in the mid-1970s, on the outskirts of Peter the Great’s imperial capital, and the doorsteps of the city-center buildings in which my mother and father grew up. We gorged on the tasty Siberian dumplings known as pelmeni and drowned our livers with countless shots of vodka. (Between our group of five, which included my boyfriend, Jim, a liter of “little water” did not go far.)

Despite our best efforts, however, we did not do it all.

A Russian saying that my father shared with me captures the futility of trying: “A barber was found dead in his shop. He had hung himself and left a note: ‘You can’t shave everybody.’”

I found myself repeating a variation of those words on my final morning in St. Petersburg as I admired the works of art on display at the spectacular Fabergé Museum, home to some 4,000 gilded, enameled, and bejeweled objects, each a study in exquisite craftsmanship. You can’t see everything.

Oh, but I tried. The House of Fabergé—founded in St. Petersburg in 1842—was as prolific as it was skilled in the jewelry arts, as the exhibits make clear. There are elaborately engraved silver services, bejeweled snuff boxes (all the rage among turn-of-the-century Russian high society), and scores of priceless treasures, including nine of 50 Imperial Easter Eggs created for the royal family prior to the 1917 October Revolution. In its well-thought-out showcases, the museum does a fantastic job of conveying the volume of Fabergé’s production without losing sight of the details that testify to its extraordinariness, from the breadth of the firm’s enamel (144 colors!) to the intricacy of its engraving. 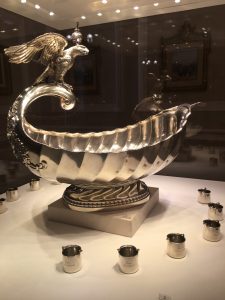 For starters, the building that houses the museum, known as the Shuvalov Palace, is magnificent. Located at 21 Fontanka River Embankment, the stately home, complete with a magnificent grand staircase, once belonged to two aristocratic families and hosted events such as the coming-of-age day of Alexander Nikolaevich, the future Emperor Alexander II. In 2013, it emerged from an extensive 7-year restoration paid for by the Link of Times, a cultural and historical foundation founded by Ukrainian-born tycoon Victor Vekselberg, whose Fabergé collection—including the nine Easter Eggs he acquired from the Forbes family in 2004—formed the basis of the museum’s holdings. 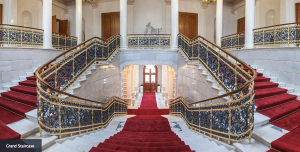 In addition to works by Peter Carl Gustavovich Fabergé, who joined the family business in 1872 and was the creative force behind the famed eggs, the collection also holds works by his contemporaries, including famed Russian jewelers and silversmiths such as Sazikov, Ovchinnikov, Khlebnikov, and Rückert.

Each room has a different focus: from grand silver punch bowls and other banquet accoutrements in the Knights’ Room to gilded religious icons festooned with gemstones and natural pearls in the Beige Room to luxe objets, such as a glass thermometer accented with royal blue enamel in the Anteroom. 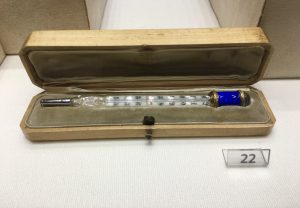 Even Fabergé’s thermometers were bejeweled!

The Blue Room, where Fabergé’s storied Easter Eggs are displayed, was under siege by camera-wielding tourists when I visited, but I understand why. The eggs vary in size, shape, and inspiration; some are smaller and minimal in decoration, others larger and more ornate (and hold surprises that are triggered when they open), but they are uniformly remarkable. The 15th Anniversary Easter Egg with its rows of square-cut emeralds, the pearl-encrusted Lilies-of-the-Valley Easter Egg, and the Bay Tree Easter Egg with its leaves of carved jade were my favorites. 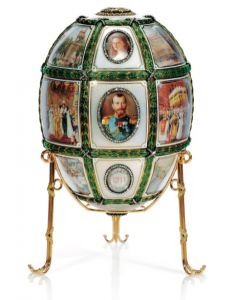 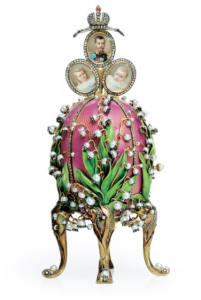 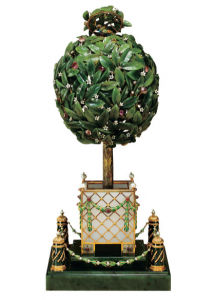 In the Gold Room I found dozens of fantasy gifts that Fabergé created as a supplier to the imperial household: elaborately gem-set snuff boxes, golden cigarette cases, picture frames made of carved rock crystal, artistic flowers, and animal figures designed, as Peter Carl Fabergé once said, for those who had it all: “There are people who long ago got tired of diamonds and pearls, and sometimes it’s inconvenient to give jewels, but these little things are perfect gifts!” 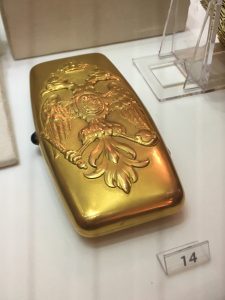 A golden cigarette case featuring the national coat of arms, a double-headed eagle, signifying the jeweler’s right to name himself a supplier to the imperial household

Not counting the room with the eggs, the Anteroom, which displayed scores of enameled objects, was the one I found most breathtaking. Beyond the array of enamel colors, I was charmed by the objects the firm chose to bejewel—like the aforementioned thermometer or a pair of opera binoculars in pale salmon colored enamel with silver and diamonds. 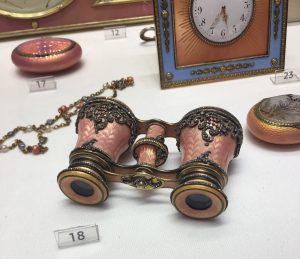 Enameled binoculars with silver and diamonds 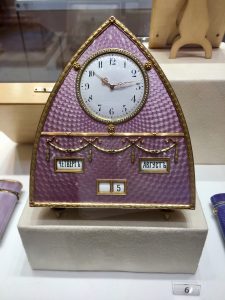 An enameled desk clock with a calendar (the date shown is Thursday, August 5)

There seemed to be no end to the luxurious things Fabergé created for his wealthy clients. And while no one needs a pair of golden scissors in an enameled manicure set, seeing so much beauty and impeccable craftsmanship in one place filled me with joy. I am not exaggerating when I say that I walked around the rooms of the Fabergé Museum smiling from ear to ear, like a lunatic. History’s finest jeweler had put a spell on me.