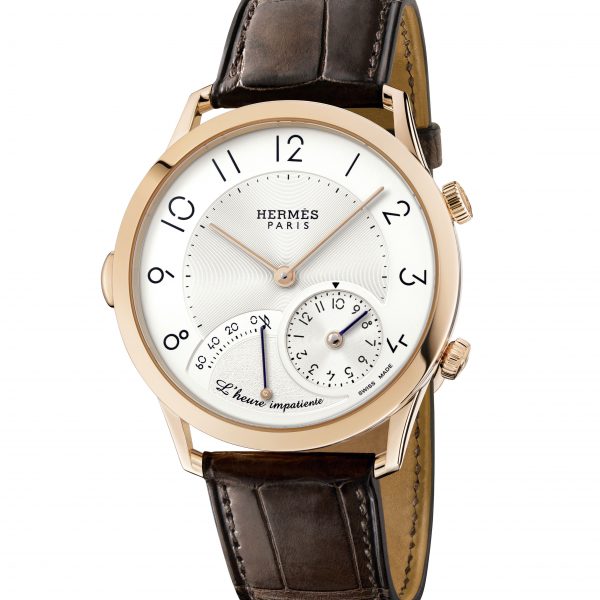 At a show where most watchmakers played it safe, these five timepieces stood out

If you’re looking for the upshot of Baselworld 2017, here it is: It’s all a blur.

Between juggling 64 appointments, I spent most of my time glued to my phone, answering work emails, posting Instagram pics, and obsessively checking my step count (I averaged more than 15,000 steps per day). From what I heard, traffic at the fair was down (13 percent fewer exhibitors!) but business was up. And most people I spoke to seemed reasonably optimistic that 2017 would turn out better than last year—not the most impressive remark, given how difficult 2016 was.

On the product front, watchmakers played it safe. The novelties were largely aesthetic in nature (lots of updated color palettes—including a boatload of green dials and straps). There were, however, a few very special pieces. Here’s my hit list of Baselworld’s five best introductions. (Look for a review of the year’s key watch trends in JCK’s June issue).

You may think of Bulgari first and foremost as a jewelry maker, but over the past few years, the Italian brand has earned a reputation for producing extremely elegant and incredibly thin men’s timepieces. This year, the firm introduced its third record-breaking model: the Octo Finissimo Automatic, the world’s slimmest self-winding watch.

With a movement that measures just 2.23 mm thick and a total thickness of 5.15 mm, the wristwatch looks and feels—thanks to its titanium casing—as wispy as a wafer.

The matte finish on the titanium lends the $13,900 timepiece a stealthy—and yes, space-age—appearance, as does the cleverly engineered titanium bracelet (the clasp folds seamlessly into the links). 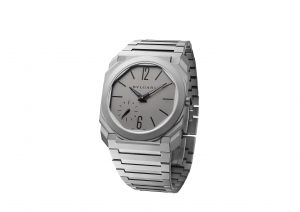 By the same token, you may think of Chanel as a fashion house. But that would be a gross underestimation. Thirty years ago, the brand opened a fine watchmaking division that has produced more than a few groundbreaking timepieces, including the 2000 and 2003 versions of the ceramic J12 model.

“Chanel is so known for perfume and fashion and that noise sometimes blurs what we do in other métiers,” said Nicolas Beau, international watch director.

About six or seven years ago, Beau told me, Chanel assembled a team of watchmakers and engineers to fortify its movement-making capabilities. And this year, for the 30th anniversary of the brand’s Première timepiece, a ladies model whose silhouette recalls the shape of its classic No. 5 perfume bottle topper (and Paris’ Place Vendome), Chanel pulled out all the stops: The house’s showpiece for 2017 is the Première Camelia Skeleton, a beautifully openworked model featuring a stepped arrangement of diamond-set wheels designed to resemble Chanel’s signature flower, the camelia. Made 100 percent in house in La Chaux-de-Fonds, the watch is proof that that a heritage steeped in fashion is no liability when it comes to fine watchmaking. 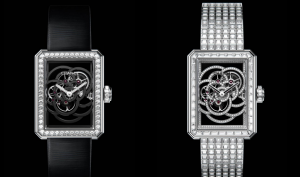 Like Bulgari and Chanel, Fabergé isn’t known primarily as a watchmaker, but that hasn’t stopped the company from turning out some truly inventive and original-looking timepieces. For the new Lady Libertine III, the brand—which was acquired by the London-based mining company Gemfields in 2013—turned to Fiona Krüger, a Scottish designer lauded for her cool, skull-shaped wristwatches, to help create a watch showcasing rubies from Gemfields’ Montepuez mine in Mozambique.

Inspired by Mozambique’s landscape—“the blue ocean, the white sand, and the red earth”—Krüger designed one of the show’s most beguiling models. She tapped the celebrated enamellist Anita Porchet to create a scene using turquoise guilloche enamel with a textured quality to evoke the ocean waves. The time-telling mechanism, developed by the respected movement developer Jean-Marc Wiederrecht of Geneva-based Agenhor, is equally impressive.

You may be sensing a theme here. Not a conventional watchmaker, Hermès has cultivated an impressive watchmaking business over the past decade with timepieces that are elegant, refined, and surprisingly playful. This year, in collaboration with Wiederrecht, the brand introduced Slim d’Hermès L’heure Impatiente, a rose gold timepiece featuring a whimsical complication: a feature that allows the wearer to set a counter for an event that will take place within 12 hours. “An hour before it occurs, the mechanical hourglass is set in motion and its progress can be followed at 6 o’clock on the dial,” explains the press release. When the moment of the event arrives, a striking mechanism sounds, lending the event a heightened sense of anticipation.

“We like to surprise people,” Guillaume de Seynes, president of Le Montres Hermès, told me. “Like an old lady who sometimes comes in a pink miniskirt.” Precisely! 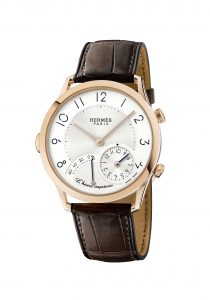 Last but not least, the creative minds at Geneva-based MB&F did not disappoint with their latest timekeeping object, a fantastic table clock produced by the clockmakers at L’Epée 1839. The torpedo-shaped rocket, named Destination Moon after a 1950s sci-fi B-movie, comes in four editions of 50 pieces each, including the one pictured below featuring green PVD. The clock’s most charming detail: Neil, a silver and stainless steel astronaut magnetically attached to the rocket’s ladder. 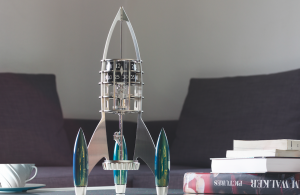 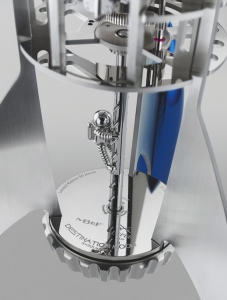