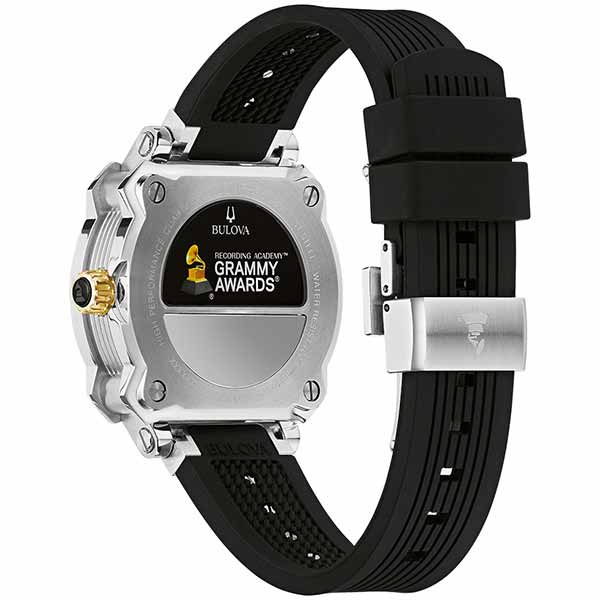 The Grammys concluded Sunday, but it’s taken me that long to process everything that happened over the weekend. It was a doozy.

Things kicked off on Thursday night with an event honoring Grammy winner Smokey Robinson at the Shinola store in Downtown Los Angeles’ Arts District. The Motown legend is the inspiration for the latest installment of the brand’s Great American series, a selection of limited-edition timepieces and products celebrating people who’ve made a mark on American history. (Past honorees include Muhammad Ali, Maya Angelou, and Jackie Robinson.)

The Smokey Robinson collection—which was on display in the store—includes two new Vinton wristwatches (a 32 mm model and a 38 mm, both featuring light blue dials inspired by the color of Smokey’s otherworldly green-blue eyes), a Runwell turntable, journals, and a greeting card featuring some of Robinson’s iconic song titles (“You’ve Really Got a Hold On Me”).

I brought my twin sister, Julia, to the event, and we had a blast gobbling up vegan hors d’oeuvres (nice touch!), drinking mezcal, and admiring the diverse and good-looking crowd that filled the beautiful brick-lined space (including Shinola fan Alice Cooper!).

Then Robinson himself showed up, fashionably late, looking dapper in a light gray suit with a pink dress shirt. “I’m very excited about this,” he told the packed room after Shinola founder Tom Kartsotis introduced him. “This watch is a beautiful watch. I have one.” He hoisted his wrist in the air to a chorus of cheers.

(The Vinton timepiece is sold only as part of a $950 limited-edition gift set that includes a vinyl record and a 45-rpm record adapter.)

Kartsotis has a knack for choosing timely and terrific partners. Hosting a party on the eve of the 62nd Annual Grammy Awards for a beloved—and remarkably spry—musical legend like Robinson was a clever and classy move. But it wasn’t just the party. The limited-edition watches are (almost) as handsome as their namesake. And because they come with engravable casebacks, they make lovely gifts (“My Girl/Guy”—awwwww). Both Jul and I left the event feeling pretty darn good about ourselves and life in general.

The good vibes continued into Saturday, the kind of January day in L.A. that makes visitors from the East Coast swoon—think 72 and sunny. It was the perfect afternoon to enjoy a rooftop brunch at the Grammy Museum, an invitation I happily accepted from Bulova, whose relationship with the Recording Academy as official timepiece partner of the Grammys is a refreshing departure from the automotive collaborations that seem to dominate the watch world.

In 2018, Bulova introduced Tune of Time, a series of short-form videos spotlighting emerging artists and the roots of their music. This year’s star, a New Jersey–raised singer-songwriter who goes by the name Fletcher, was a revelation. Her real name is Cari Fletcher, and she’s a 25-year-old from Asbury Park with some serious pipes and a lovely, genuine way about her. Before performing an unplugged set featuring songs from her EP, You Ruined New York City for Me, she spoke on stage with Scott Goldman, vice president of the Grammy Foundation, and explained her personal connection to Bulova.

“My uncle, who passed away when he was really young—I have his watch and it literally comes with me everywhere,” Fletcher explained on the video, while holding the watch, a simple bracelet style with a handsome two-tone finish. “There’s never been a performance where I’ve gone on stage and not held it in my hand for a second.”

After her poignant performance, we filed upstairs for brunch, where I ran into two local retailers: Arch Kitsinian, president of Kitsinian Jewelers, and Scott Meller, president of Feldmar Watch Co.

Arch had brought his 8-year-old son, Sako, to the event, and as we ate our meal, we talked about life in the Valley, where we both live; his new store in Valencia, Calif.; his three stores in Hawaii; and whether he’d make it to Tucson for the gem shows this year. It was a thoroughly delightful conversation. Once again, I left for home in good spirits, wearing a borrowed special-edition Grammy watch Bulova created to present to first-time winners!

Although the piece—which features a golden dial made of Grammium, the same custom alloy used on the gold gramophone statue given to winners—is not for sale, I did come away with a parting gift: the brand’s commercially available Grammy Automatic watch, a black-and-gold skeletonized number that is sexy as all get out.

I had just checked in for my noon appointment at Drybar Encino on Sunday morning, when one of the stylists blurted out something that sounded, frankly, unbelievable. “We just heard Kobe Bryant died in a helicopter crash around 10 a.m. in Calabasas.” I scanned the Los Angeles Times homepage and found an item about the accident, but it didn’t name any victims. It was still possible to believe the stylist had heard wrong.

By now, of course, we know that was magical thinking. I headed home to get dressed for the awards ceremony that night, still reeling from the news, which got much worse with the revelation that Kobe Bryant’s 13-year-old daughter Gianna and seven other souls lost their lives in the crash.

Feeling somber and excited—a really confusing combination, I must say—my partner, Jim, and I took an Uber to JW Marriott Los Angeles L.A. Live, ground zero for Grammy staging, if the hordes of people in spectacular, rhinestone-studded, questionable, risk-taking outfits passing by were any indication. We met up with the rest of the Bulova team and shuffled through security at the nearby Staples Center, before finally taking our seats in “the house that Kobe built,” a refrain that echoed around the Staples Center and on social media for the rest of the evening.

I loved virtually all of the performances—soulful Alicia Keyes, super-sassy Lizzo, melancholy and talented Billie Eilish (who picked up five awards that night—not bad for a newbie!), and Usher channeling Prince, chief among them. It was uplifting to be in a room full of people who recognize the healing power of music. And yet I couldn’t shake the gloomy feeling that had settled over me.

I thought back to something Fletcher said in her Tune of Time video: “One of the most amazing things that somebody can give you is their time. Because in the grand scheme of things, we’re here for such a blink of an eye. So if someone’s giving you their time, you have to respect that.”

Rest in peace, Kobe and crew.

Top: The engravable back of the 2020 special-edition Bulova watch presented to first-time Grammy winners.