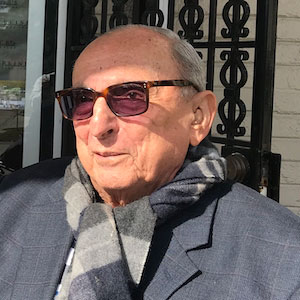 Irvin Reiner (pictured), the founder and longtime owner of Reiner’s Fine Jewelry in Houston, died May 7. He was 94.

A graduate of Tulane University, he help launch Reiner’s in Houston along with his parents, Nathan and Bessie, in 1945.

Nathan had previously run a jewelry store in New Orleans along with his two brothers. He continued working at the store until his late 80s, eventually joined by son Jack and daughter Dorothy.

Reiner’s Fine Jewelry was located in downtown Houston for five decades before moving to its current location on Westheimer Road.

Like his father, Irvin worked at the store well past his retirement age, “holding court in his special chair until his final months,” according to a family obit. The store is currently run by his youngest son Bert and nephew Lenny.

“Irvin was dedicated to Reiner’s Fine Jewelry and made his passion his business,” the obit said “He never worked a day in his life.

“Irvin never met a stranger and was a friend to all,” it continued. “He had a big heart, enjoyed helping others and was known to employ an honest man for an honest day’s work. On one occasion, he employed a walk-in off the street. Irvin was charismatic, witty, and had an infectious laugh. He will be remembered for his sincere generosity, wonderful sense of humor, exceptional wisdom, and his unique ability to tell you what you needed to hear with such a loving tone.”

He also served as the founding president of the Texas Pawnbrokers Association. Other passions included his religion, a perfectly cooked steak, a fine glass of scotch, horse racing, and traveling—particularly to New York City.

In lieu of flowers, the family asks that donations be made to Shriners Hospitals for Children, 6977 Main St., Houston, Texas 77030.