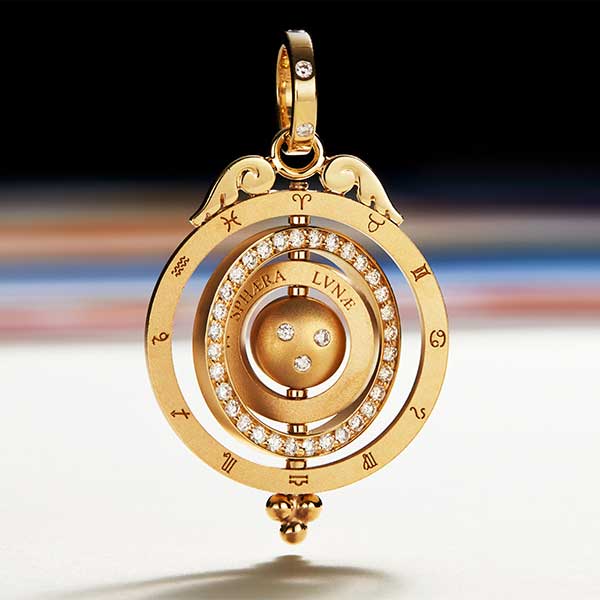 Devotees of the jewelry designer Temple St. Clair know that she is as well-versed in Italian art, literature, and culture as she is in moonstones, rock crystals, and elegant goldwork. This knowledge was well on display during the talk she gave during NYC Jewelry Week; in it, she eloquently described Cosmic Journey, the three-part collection she has been unveiling in installments since August.

Inspired by The Divine Comedy by Dante Alighieri, the famed 13th-century Italian poet, St. Clair has set out to tell a “tale of hope and looking forward,” she says. “The narrative of Dante’s Divine Comedy is a journey through the darkness to the light, and the idea that no matter how much doubt and confusion there can be around our own humanity, we can count on the steady movement of the universe.”

Just as Dante structured his epic poem in three parts (Inferno, Purgatorio, and Paradiso), St. Clair gives us jewels organized in three “chapters,” all inspired by the mysteries of the cosmos and the intersection of art and science.

To fully appreciate the third installment in this collection, you need to view it in the context of its two preceding chapters, Astrid and Stelle.

“The new Astrid rock crystal amulet is the ultimate gift for a first-time Temple St. Clair amulet purchaser, as well as for the dedicated collector,” says St. Clair. “The Astrid ring, a miniature model of the cosmos, can be worn as a pendant or a ring, and is for anyone who is fascinated with the mystery of the universe and wants to literally hold the cosmos in her hand.”

Stelle signals to the wearer that a brighter future lies ahead with a rainbow of colored gemstones. “The Horizon pendant, ring, and earrings are a great addition of brilliant color to anyone’s collection,” says St. Clair. Illustrating cosmic patterns and colors, “the pendant is a great layering piece for anyone who likes to collect meaningful charms, and each Horizon jewel is perfect on its own or [can be worn] as a suite.”

Finally, Sole—the climax of the cosmic journey—is an éclat of brilliant diamonds and gleaming gold, a final rhapsody of love and light.

Launched at the end of October, the pieces seem particularly well-suited to holiday gifting. “These are classics that go with everything, everywhere,” says St. Clair.

A closer look at some of the newest Sole pieces are below.

Meanwhile, since much of the collection is produced in Italy, I was curious about the readiness of her partner workshops in Florence. Says the designer:

“Certainly as with most companies, our production is somewhat reduced, but we continue to keep up with all levels from our fine jewelry to high jewelry to some amazing haute couture pieces that have come to fruition during this period.

“My workshops in Italy reopened very carefully in May. The Florentine goldsmiths have mostly caught up and are keeping up well with deliveries. We also work with wonderful artisans and goldsmiths in Sri Lanka and in Thailand. Miraculously, everyone is working, but with reduced staff to create safe workspaces. We’ve had no delays on the material side. The only real delays are with shipping couriers due to their own reduced staffs and reduced staffing at airports.

“I miss visiting and seeing all of my production partners in person—my relationships with them are long-standing and profoundly important to our company.”

And her mindset in general, for the holidays and what the future holds? “Life carries on, and ultimately love will guide the way.”

As the festive season kicks off, that seems like a message we can all hold on to. Come on, universe, let there be light!

Top: The Triple Orbit Tolomeo pendant, part of Temple St. Clair’s new Sole collection, pairs diamonds with 18k gold rings that capture the orbits of the sun and moon around the earth, $11,500 (all images courtesy of Temple St. Clair)