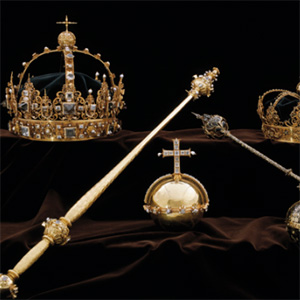 Swedish police reported on Tuesday that thieves performed a smash-and-grab robbery at the medieval Strängnäs Cathedral, near Stockholm, making off with jewel-encrusted gold crowns dating to the early 1600s before escaping in an open-top speedboat. At press time, the robbers were still at large.

They heist, which feels like a scene out of The Italian Job, included the crowns and a gold orb adorned with a crucifix, all belonging to Swedish monarchs King Charles IX and his wife Queen Christina (1573–1625).

The Associated Press reports that one of the bejeweled crowns and the orb, which date to 1611, were made for King Karl IX’s funeral—and that the other crown dated back to 1625 and was used in Queen Christina’s (1626–1689) funeral. All three pieces were at one time buried with their monarchs but were later exhumed for display.

Visitors were touring the cathedral, where the jewels were on display, when the heist happened just before noon.

“The alarm went off when the burglars smashed the security glass and stole the artifacts,” Catharina Frojd, spokesperson for the 14th-century cathedral, told The Associated Press.

Before jumping into a speedboat parked on the edge of Lake Mälaren, the thieves sped away from the scene on stolen bicycles equipped with baskets and a child’s seat, according to the police report.

Like all heists of famous jewels, this one’s a head-scratcher. You can’t actually sell famous jewels; their high visibility makes them kryptonite, even for dealers of stolen goods.

That very fact may be why the the last heist of royal jewels in Sweden ended so bleakly. In 2013, a crown and scepter used in the funeral of Sweden’s King Johan III were taken from the city of Västerås, also located on the shore of Lake Mälaren.

Police eventually restored the precious items—which they found stuffed into two large trash bags on the side of a highway.