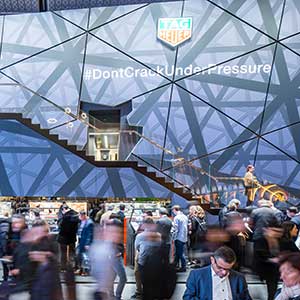 Swatch Group, which made waves when it withdrew from Baselworld last summer, is now indicating it has no plans to return to the watch industry’s biggest fair.

“There’s no need for it anymore,” Swatch Group CEO Nick Hayek said in an interview, according to Bloomberg. “The world has changed.”

A Swatch spokesperson confirmed the comments to JCK.

Swatch Group, the world’s biggest watch company, was also the biggest exhibitor at Baselworld, spending an estimated $50 million a year.

When Swatch first pulled out, Hayek indicated that his company might one day exhibit again at the show.

“They have to reinvent themselves,” he said in an interview. “We are ready to help them. But for 2019, we are definitely out.”

The 2019 watch fair will kick off in Basel, Switzerland, on March 21 with 500 exhibitors, which is less than the 600 it had last year, and significantly below the more than 2,000 exhibitors it used to attract at its peak.

“This number is smaller than it was in 2018 and certainly lower than we had hoped,” admitted Baselworld managing director Michel Loris-Melikoff in a statement.

But he said he was “confident that with our new concepts and offers, we will be able to score points with exhibitors and visitors alike and that together we will achieve the turnaround.”

Loris-Melikoff added, “The process of transforming Baselworld into an experience platform is in full swing” and that the fair’s new concepts had already received “good feedback.”

Whether or not it does return, Swatch’s decision to pull out sparked a variety of changes at the show, most of which were welcomed by exhibitors. Baselworld got local hotels to agree to reduce rates during the fair as well as to drop their much-loathed minimum-stay requirements. In addition, it agreed with rival fair to SIHH to sync up their dates going forward, so from 2020 onward the two shows will occur back to back.

This story has been updated to include confirmation by a Swatch spokesperson.