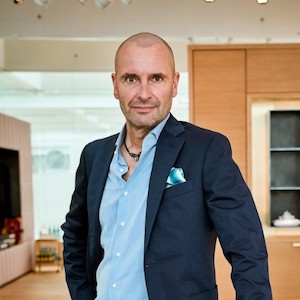 Swarovski has named Robert Buchbauer (pictured), the great-great-grandson of the company founder, its new chief executive officer. His appointment is part of an overall realignment of the company that gives it a more centralized management structure than it has had traditionally.

In a terse statement, the company said that Buchbauer will retain his current title as chairman of the company’s executive board, the panel of family members that has traditionally run the business. He plans to “realign the company along a common vision, growth strategy and organization,” it added.

According to WWD, which first reported the news, the shakeup strips Nadja Swarovski—another great-great-grandchild of the company’s founder—of her responsibilities running Atelier Swarovski, the fine jewelry label she launched in 2007 as a fashion-oriented adjunct to the crystal brand.

The company and Nadja Swarovski did not return requests for comment about her role going forward.

A source told WWD that the Atelier label is a “money-losing business” that’s “provided a good image for the overall brand.”

Another source told the newspaper there was “tension” within the family, and that “decision-making has never been smooth.

“There was no CEO, and it was always a difficult process to get decisions made and approved,” said the source. “[T]hey clearly took the opportunity of COVID-19 to cut costs and reorganize.”

In 2005, The New York Times wrote, “It is hard to say who’s the boss at Swarovski. The company is owned by 56 family members. Decisions are made by an executive board of eight family members and an advisory board of six others.”

In addition to other changes, the company reported that Markus Langes-Swarovski has resigned from the executive board, though in the future he will become a member of its advisory board and chairman of its board of directors, which seems to be a different entity than the executive board.

Mathias Margreiter, another family member, will remain on the now three-person executive board, along with Buchbauer and Nadja Swarovski.

According to 2013 interview with Vogue, Buchbauer initially did not plan to join the family business, working at marketing jobs elsewhere.

“I bumped into one of my uncles and he said: ‘Why don’t you work for us?’ I went for the interview and went into the marketing team [in 1996] and never left.”

He became head of its consumer goods division six years later, according to his LinkedIn profile.

“Once you start, you get addicted and there’s no way out,” he added. “It’s like prison…but a beautiful prison.”

On a 2018 Watchespedia podcast, he said the company always had to balance “emotional involvement” and “rational assessment.”

“We are selling an emotional product,” he said. “[The emotional] component is a must-have. Otherwise, you will never be credible with the consumer.

“On the other hand, this is a business, this is a company that needs to be run by [key performance indicators], and in rational terms, and at the end of the day, it needs to generate a profit in order to survive. So those are the things that you need to keep in balance, day after day.”