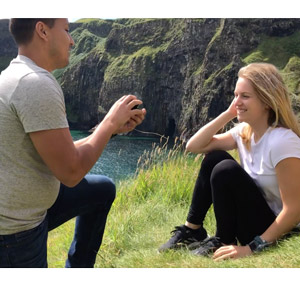 The contest asked its entrants to submit a 60-second video of their proposal story, describing details such as what it was like seeing their engagement ring for the first time and the kind of impact it had on them. Entries were judged based on creativity, emotion, execution, and shareability, by social media influencers
@thediamondsgirl, @weddingdiary, and @roamaroo.

Newly engaged Nicole and Isaiah of North Carolina were chosen as this year’s winners, after sharing a video of their engagement while on a vacation in Ireland. The winners will be awarded a trip to the Northwest Territories of Canada this March, where they’ll be treated to a week of aurora borealis viewing, dogsledding, snowmobiling, and more, while learning of the effect that diamonds have on the country’s conversation efforts, culture, and community.

“Educating the younger generation on the good diamonds do and inviting them to engage in this narrative will help boost consumer confidence in,  and ultimately demand for, diamonds,” said Diamond Empowerment Fund president Anna Martin, in a statement.

The contest will be back again later in the year. For more information, and to see the winning video entry, visit diamondsdogood.com/myproposalcontest.

Surya Insurance Services, founded in 2005 by Surya Capital, has announced its merger with Associated Insurance International Brokers (AIB), founded in 1992 by Elan Manham. Both companies provide jewelry and diamond wholesalers and retailers with Jewelers Block insurance.

The companies will each continue to operate under their own names, offering Jewelers Block insurance and other specialized insurance policies. Surya chief executive officer Janak Dave will continue in the same position, while AIB founder Elan Manham will join Surya as president.

“The combined strength of the two companies will allow Surya to continue to grow to provide even better service to all of our customers,” said Dave in a statement. “In addition to growing our Jewelers Block insurance business, we plan to offer more insurance products specifically tailored to the needs of the industry’s top diamond and jewelry professionals, including covering the risks of rough processing, repolishing, and the setting of important diamonds and gemstones.”

For more information about the joined companies’ services, visit suryains.com.