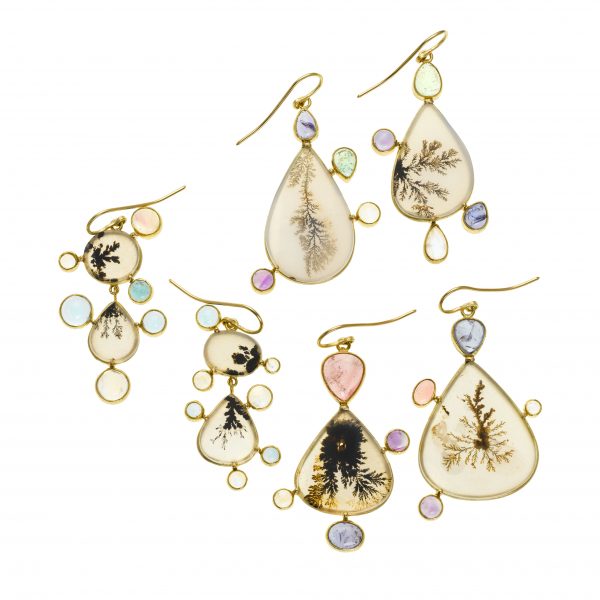 At first glance, a dendritic stone might be mistaken by the uninitiated for a shard of ancient Chinese porcelain. But while the intricate vegetal patterns that distinguish dendritic quartz and dendritic agate have a hand-painted, calligraphic quality, they’re actually a natural phenomenon caused by fern-like inclusions of iron, manganese, or other metallic oxides known as dendrites.

The best specimens of dendritic quartz and agate hail from Brazil, India, and Montana and are catching on among our industry’s more experimental artisan designers. Dendritic agate is itself a type of quartz (a variety of chalcedony, technically) and displays a milky, opaque “background” (think of a snowy lawn strewn with fallen branches). Dendritic quartz, on the other hand, has a transparent, crystalline quality—it’s more shimmery and iridescent. “This is the dendritic stone I see used the most in fine jewelry,” says gem expert and trend tracker Benjamin Guttery of Third Coast Gems.

“It’s exciting to see enthusiasm for these different forms of included quartzes,” says the noted gem purveyor and lapidary artist Robert Bentley. “More than many other gemstones being used today, they inspire people to go on an adventure in the endlessly fascinating world of the mineral kingdom.”

“Nothing is more poetic than dendritic agate,” he adds. “In a well-cut stone, the manganese inclusions mimic trees and plants, evoking dreamy landscapes or still lives.”

Designer Judi Powers, who debuted a collection starring dendritic agate and quartz at JCK Las Vegas, agrees: “The frilly, sea kelp–like inclusions really amplify the uniqueness of each stone and the absolute magic of geology,” says Powers, who likens the reddish-brown or black dendritic elements to old sepia-tone and tin-type photographs. “I studied art history, and the pictorial quality always delights me. Plus, I find the process of selecting the stones one by one to be both meditative and exciting.”

Many of Powers’ peers favor the use of moss agate, beloved for its grass-green dendrites (the result of manganese). The color and patterns suggest a rainforest thick with hanging vines and leafy canopies, making moss agate ideal for jewelry designs with an organic, botanical look and feel.

Check out the examples below to better understand the distinctions between the different dendritic stones…and, as Bentley suggested, let the different patterns, colors, and textures whisk you away on a magical adventure. 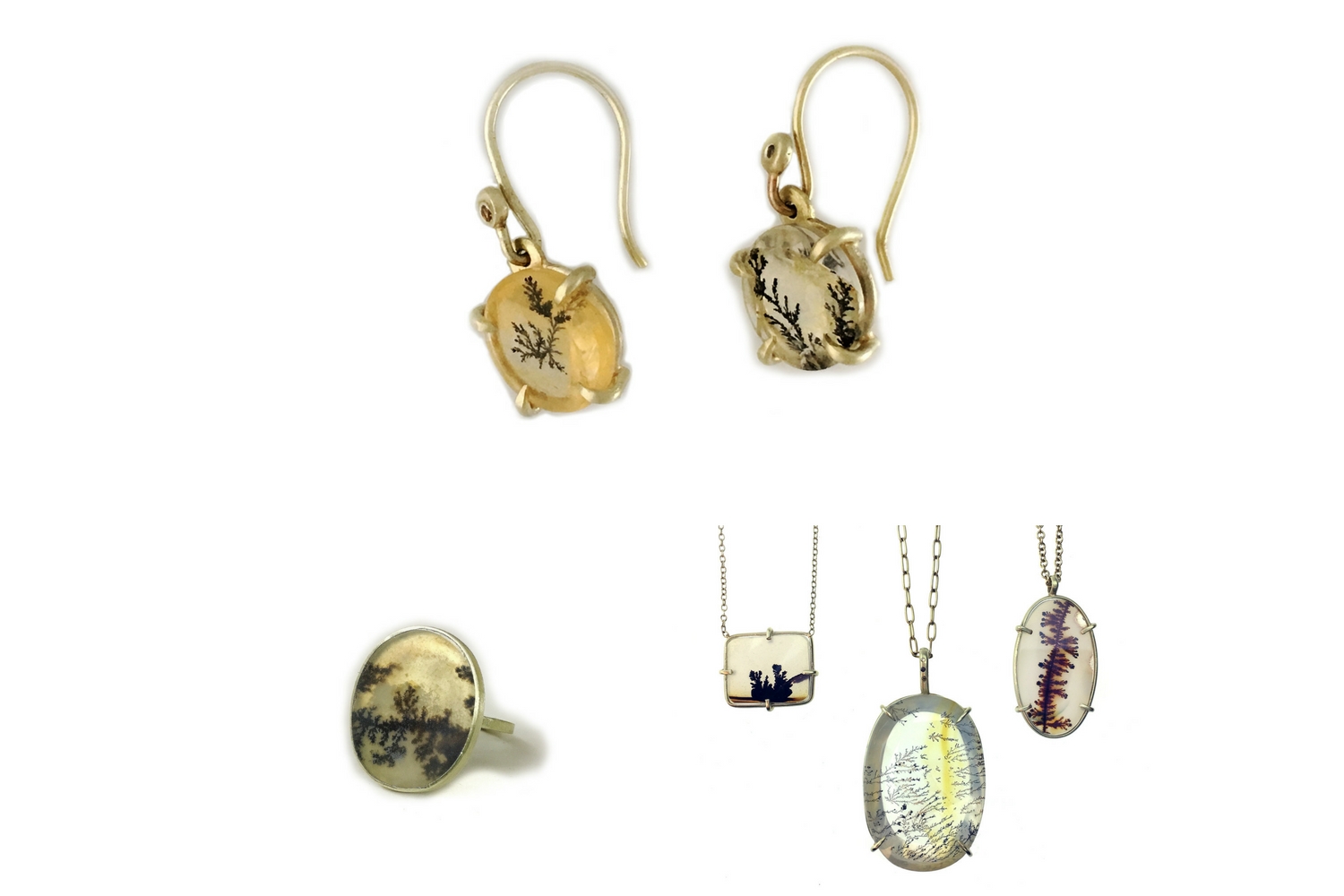 Dendritic agate pins with assorted gems including amethyst, peridot, carnelian, pink tourmaline, tanzanite, aquamarine, and moonstone, in 18k and 22k gold, from $980 each; Judy Geib + a 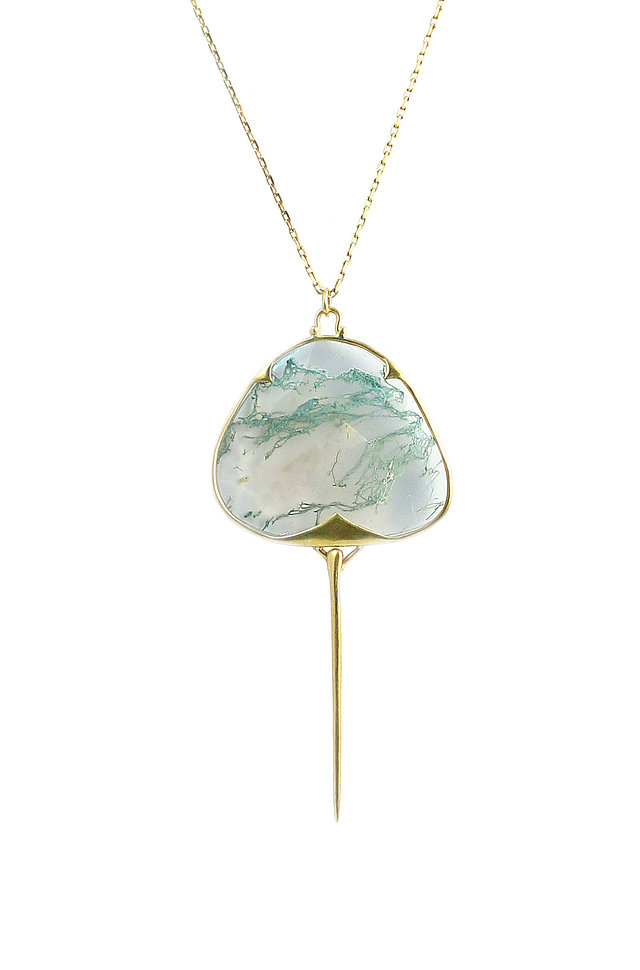 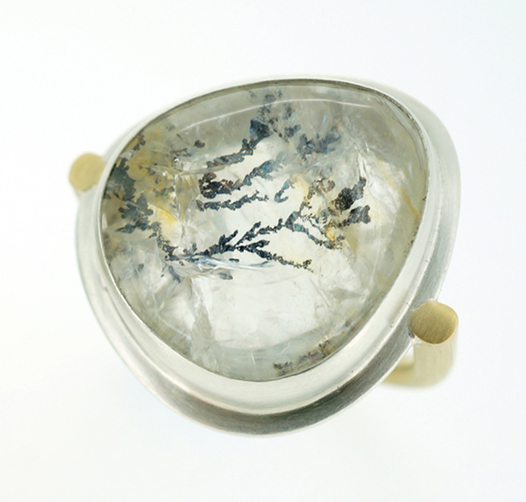 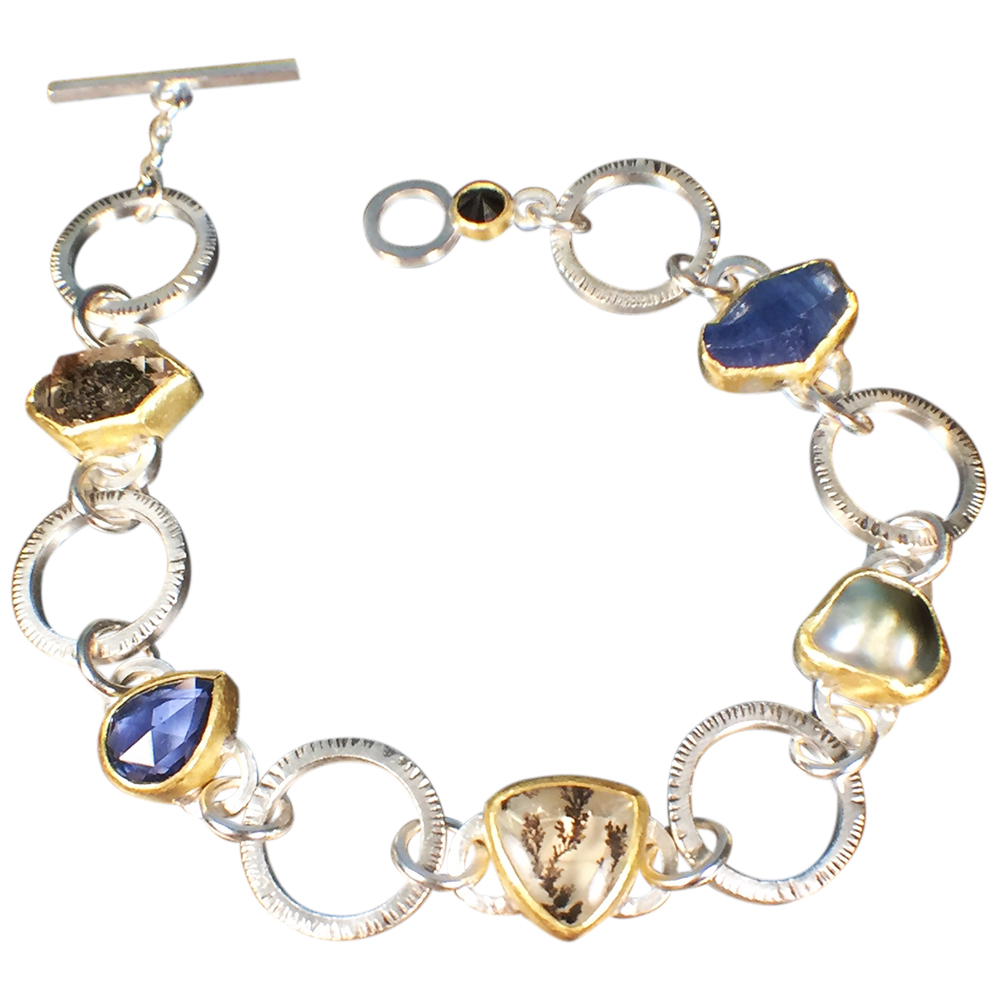 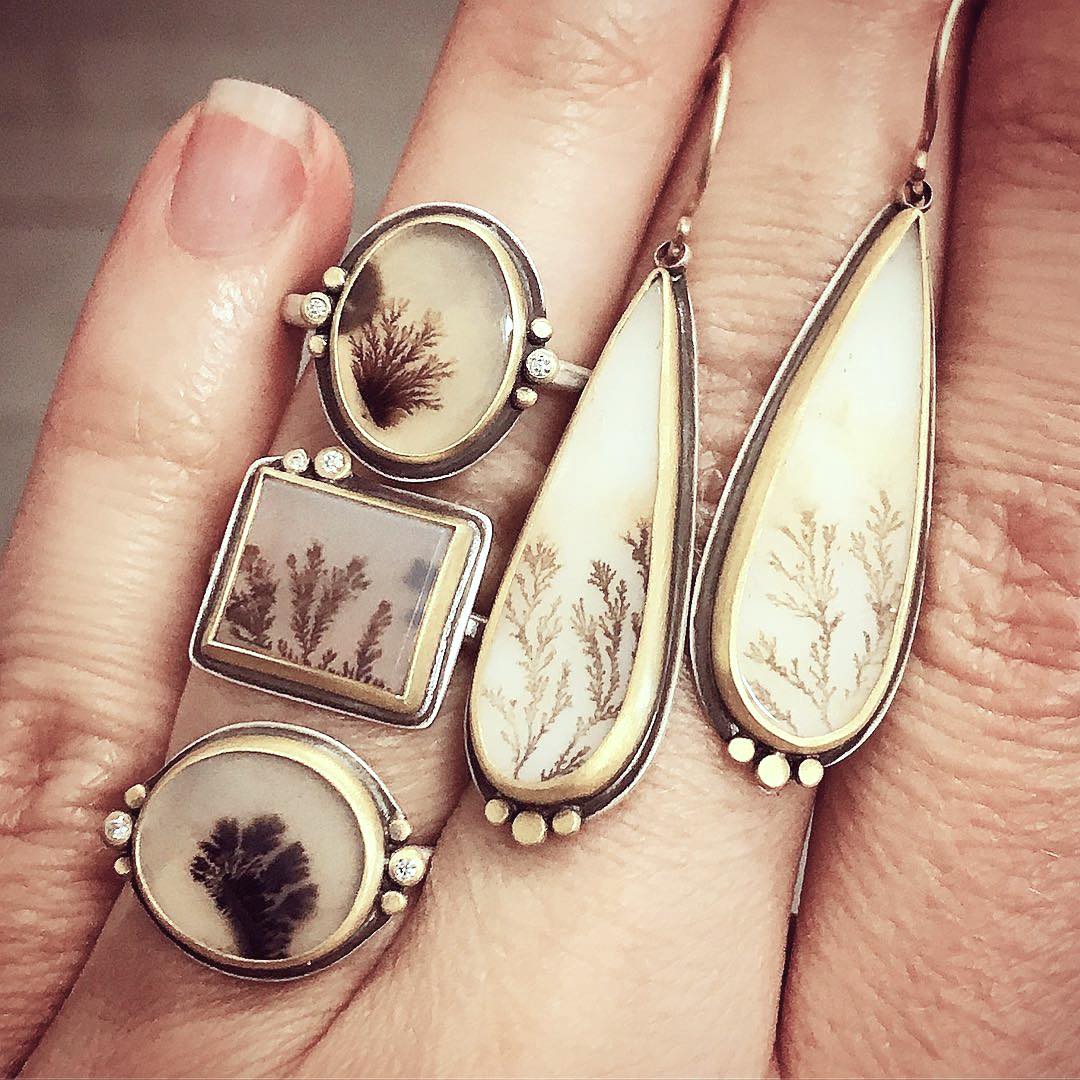 Dendritic agate rings with diamonds, $695 each, and dendritic agate earrings, $1,375, both in sterling silver with 22k gold bezels; Ananda Khalsa 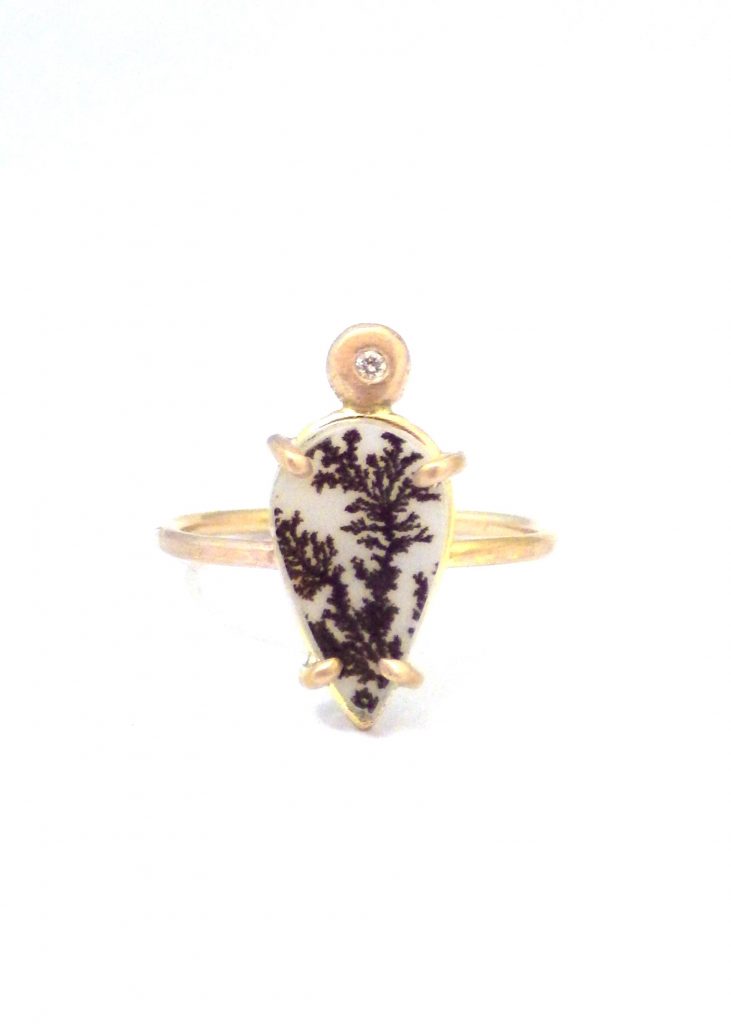 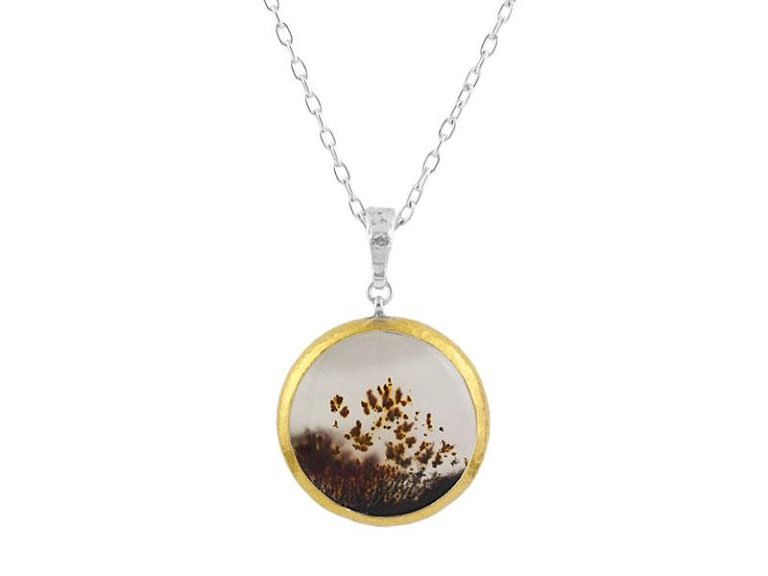 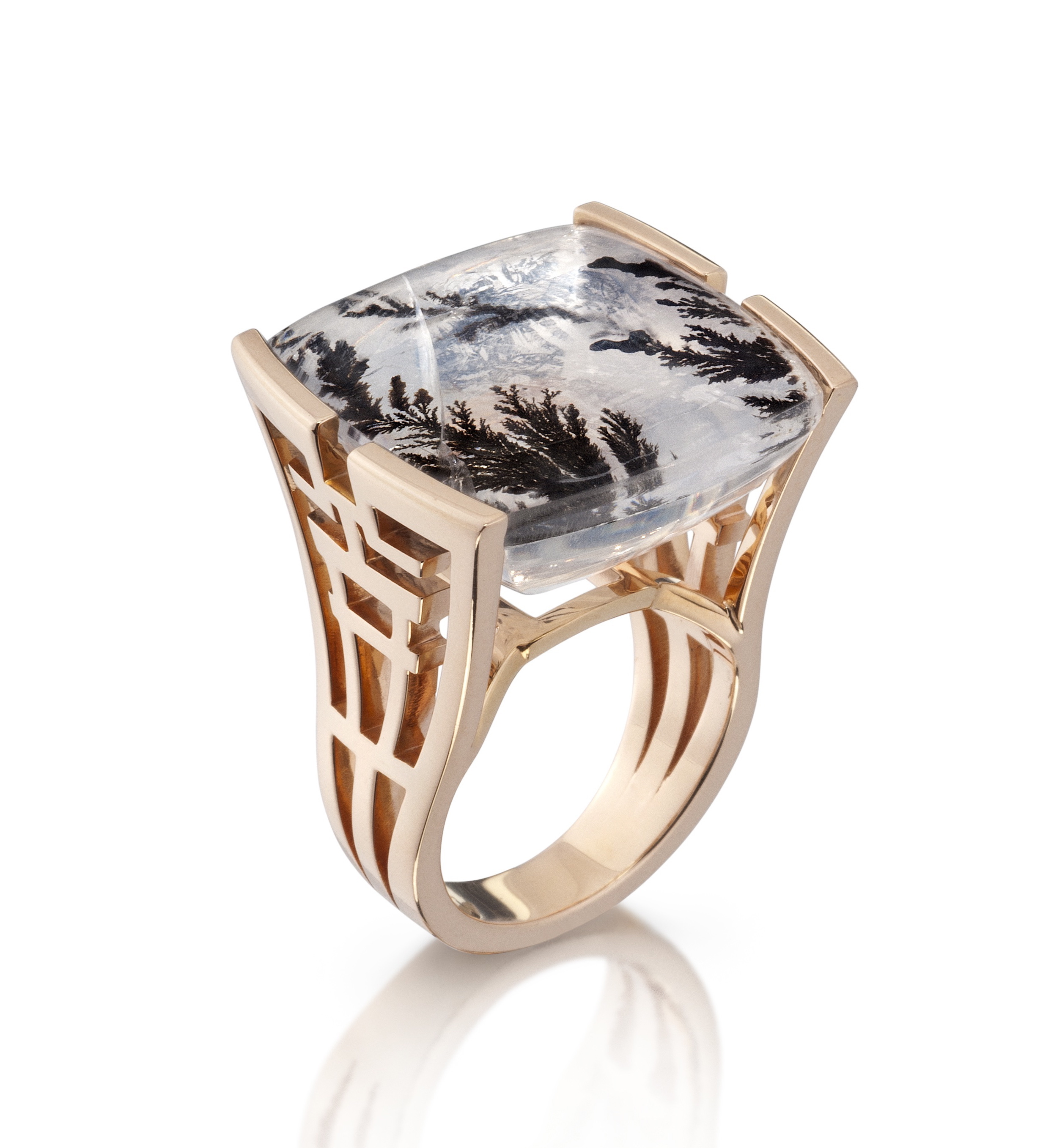 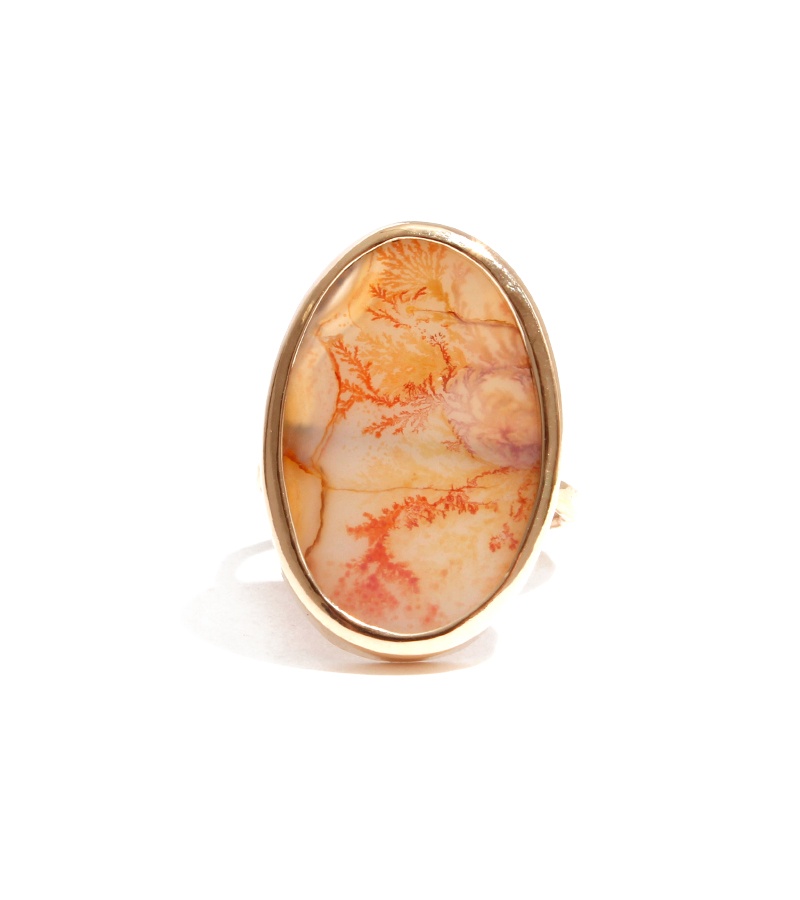 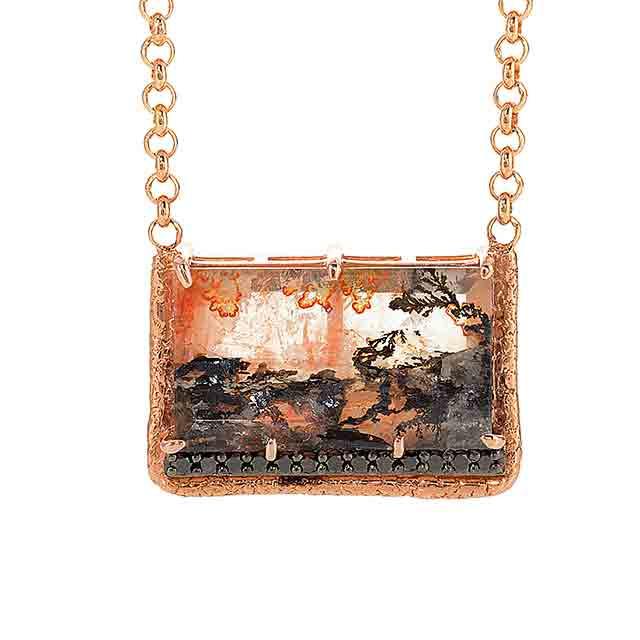 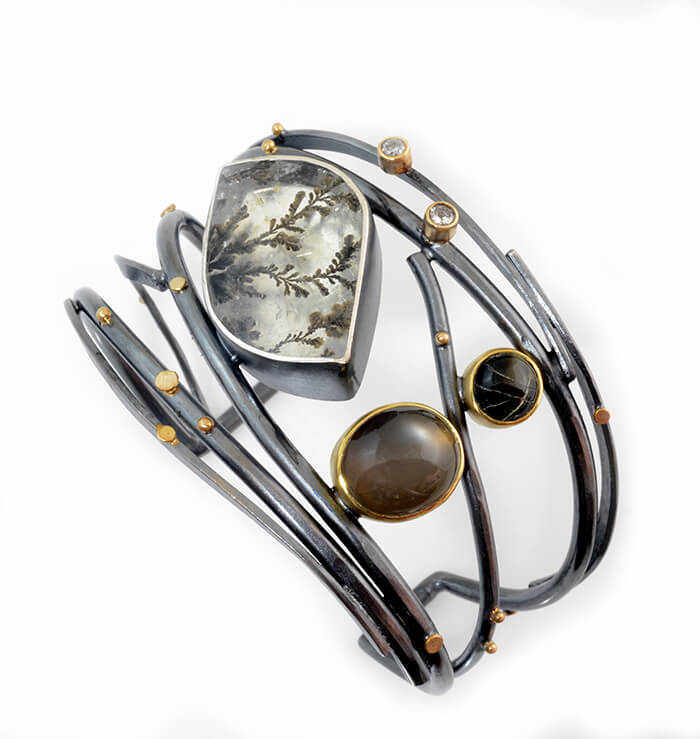 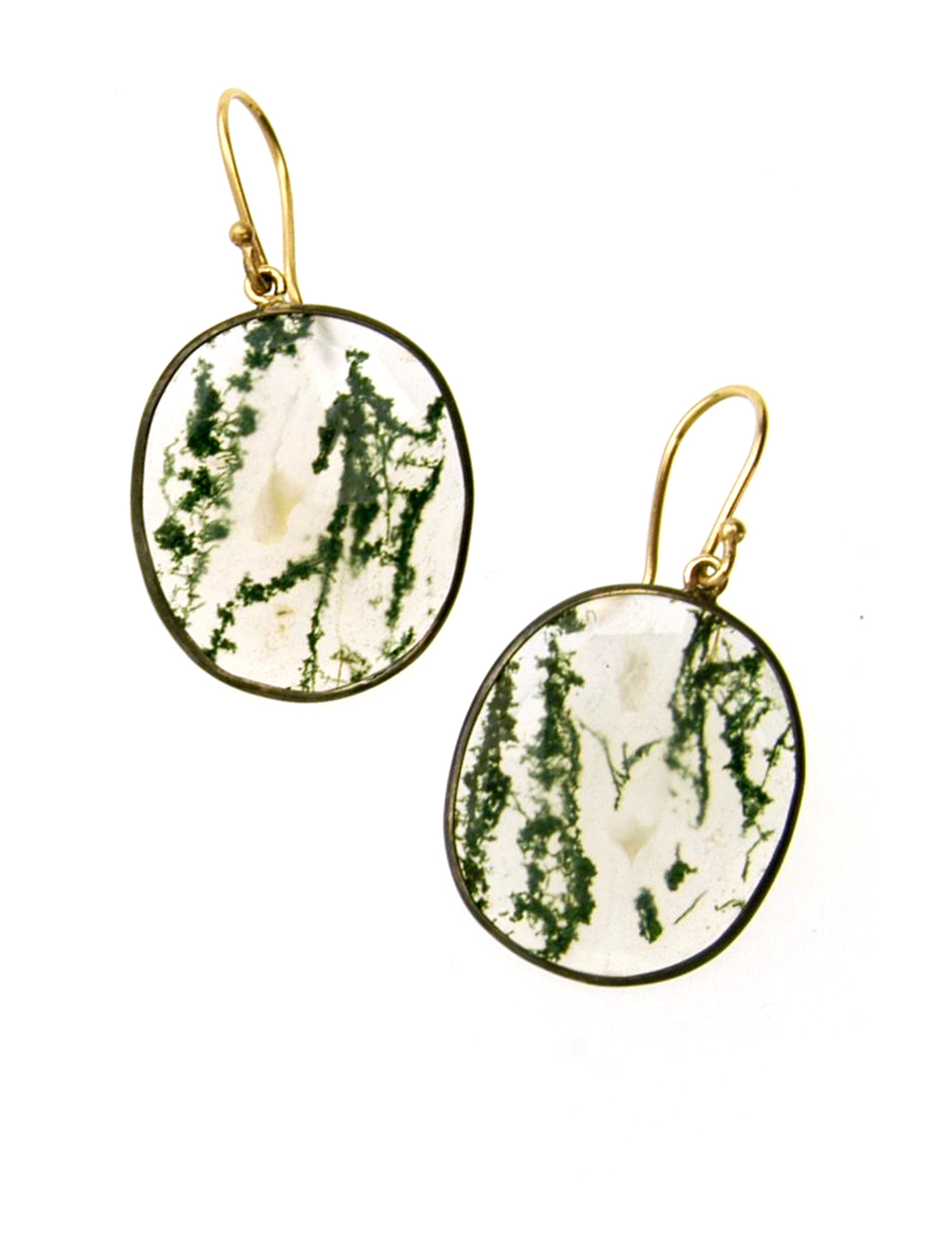 (Photo at top courtesy of Judy Geib + a)