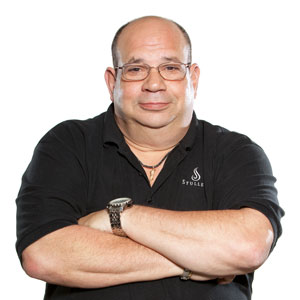 Stuller has announced that Andrew “Andy” Kroungold—a veteran member of the company’s tool department who was known to many as “Andy the Tool Guy”—passed away suddenly on Nov. 27. He was 66 years old.

Kroungold began his career in the jewelry industry as a member of the Swest team in the 1980s and joined Stuller in 1999. As a 20-year veteran of Stuller, he served in a variety of roles at the company, most recently as tools business director.

He was famous around the halls of Stuller—and with so many independent jewelers nationwide—for his deep knowledge of tools and machinery and for his dedication to his clients and colleagues.

“If I could sum Andy up in one word, it would passionate,” Trissy Boutin, merchandising project planner, tells JCK. “He was incredibly knowledgeable, thoughtful, and helpful. He had a deep and insightful appreciation for the jewelry industry, our customers, and, most importantly, his colleagues. In all the years I knew Andy, he has always been so genuine and resourceful. He was definitely one of a kind!”

Tammy Lail, vice president of merchandising, says, “There is no other Andy—no one else in the industry like him. I was fortunate to not only work with him, but to love him as family. He will be deeply missed by so many.”

A resident of Youngsville, La., for most of his life, Kroungold competed on the swim team in high school and earned his bachelor’s degree in business from Florida International University. He was an avid fan of the Miami Dolphins football team.

Kroungold is survived by his son Robert and his daughter-in-law Hannah. A memorial service for Kroungold will be held at 1 p.m. Monday in La Chapelle de Martin & Castille in Lafayette, La.

(Reporter’s note: For several years now, I’ve relied on Kroungold at the JCK Las Vegas show to catch me up on Stuller’s latest new tools. I would seek out Andy specifically because I knew he could answer any and all questions I had—and also because I enjoyed his warm, and completely unique, personality. JCK sends Stuller and Andy’s family our deepest condolences.)