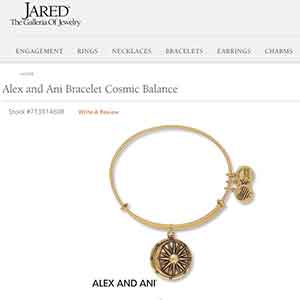 Sterling Jewelers has sued Alex and Ani, claiming the company owes it over $2 million following an ill-fated agreement to sell its products at Jared.

In Aug. 2015, Sterling forged an agreement to sell Alex and Ani’s products at over 100 Jared stores. The deal said Sterling could not sell the items using “certain discounting strategies,” according to legal papers filed in Ohio federal court.

Sterling claimed those terms caused the products to underperform at retail, leaving it with millions in inventory.

“Because of the Alex and Ani sales terms, as well as Alex and Ani’s ongoing concerns about possible negative effects on its brand, Sterling was unable to liquidate or resell the backlog of inventory to other third parties or at discounted pricing,” the papers said.

The two companies entered into negotiations where Alex and Ani would take back the inventory. Alex and Ani was sent one shipment but didn’t remit payment for it, Signet claims.

Sterling then declared the agreement invalid, and began to discount Alex and Ani product, leading the latter company to send cease and desist letters, the court papers said.

The case was originally filed in Summit County, Ohio, court in November and then transferred to Ohio federal court a month later. At press time, Alex and Ani has not filed a response in federal court.