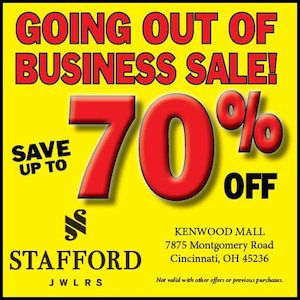 Stafford Jewelers, which has three stores in the Cincinnati area, is shutting down its operations, it announced.

The store was established in 1994 by James Stafford and his wife, Amy. James Stafford died in 2016 at age 57. It is now run by Amy and their two sons, James Jr. and Jacob.

The store did not return requests for comment from JCK at the time of publication, but a spokesperson told the Cincinnati Business Courier that the decision to shut the chain down was not the result of COVID-19, but rather stemmed from the owners’ desire to retire.

According to the publication, after being subject to mandatory closure as a result of the COVID-19 pandemic, two of its three stores never reopened. The third store, Shop Jacob James—a  consignment-based retailer that sold more than jewelry—just opened last year.

The store’s going-out-of-business sale began on June 25, according to its website.

Stafford Jewelers in Cincinnati is not affiliated with Stafford’s Diamonds in Dayton, Ohio, which is owned by John Stafford and remains in business.