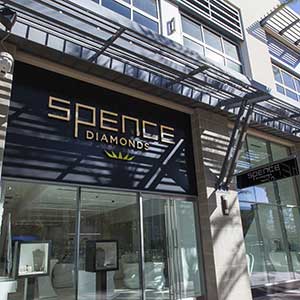 The third time was not the charm for Spence Diamonds.

“We had a U.S. strategy, but the impact and the uncertainty caused by the [COVID-19] pandemic forced a significant review of the business,” he says. “We were looking at how to make that business profitable. We were committed to that business, but obviously that turn of events created a very different scenario.”

The decision to close the stores was made in March, shortly after local governments began asking retailers to temporarily shut.

The company still has seven stores in Canada, all of which are open with regular hours. Beveridge says the company plans to focus on the Canadian market going forward.

The company had stores in Scottsdale, Ariz.; San Jose, Calif.; and Austin, Dallas, and Plano, Texas. It never sold online, which would make surviving a pandemic particularly hard.

Spence Diamonds’ most recent attempt to enter the U.S. market dates back to 2016 and was given a boost after Lion Capital and Ivest Consumer Partners purchased the chain in 2015. Lion Capital partner Eric Lindberg took over as chairman and was sometimes listed as CEO. The company hoped to open dozens of stores by 2020, he told JCK.

The company became a big proponent of lab-grown diamonds, which it called “artisan created diamonds,” though it sold natural gems as well.

In May 2019, Veeral Rathod, the former founder of menswear brand J. Hilburn, took over as CEO, working out of Dallas, with Lindberg becoming executive chairman. Lindberg left the company at the end of last year, according to his LinkedIn profile.

This is the third time in the last three decades that Vancouver, British Columbia–based Spence, which originally made its name with “brass and glass” displays, has tried to enter the U.S. market. In the 1990s, it opened stores in “low-rent strip centers” in Minneapolis, according to former chairman George Jones.

In 2009, it purchased three former Robbins Brothers stores in Houston, but gave them up two years later. “They weren’t really Spence stores, they were Robbins Brothers with the name change,” said Jones.

Beveridge says that the company likely wouldn’t have done anything differently as far as its U.S. strategy, but adds, “This last attempt will likely be the last attempt.”