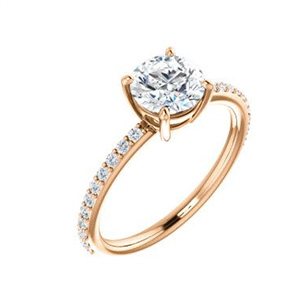 When thinking about recent innovations in gemology, the rapid rise of lab-grown diamonds instantly springs to mind.

But in a far-off corner, a group of seasoned product, technology, and retail executives from outside the industry is laser-focused on how a diamond looks—not where it came from. And their big idea is similarly state of the art.

Sparkle Cut, a new, purely e-commerce brand of diamonds (and accompanying engagement rings), has pioneered a new proprietary diamond cut that delivers a 50-to-100-percent increase in sparkle, due to a series of small nano-cuts that are around one-fiftieth the width of a human hair.

The increase in sparkle makes high-grade diamonds look spectacular and so-so stones—like your Js and Ks—sparkle brilliantly. The company eschews the 4Cs (which so many in the industry agree is an outdated metric) and instead focuses on what it’s calling  the “Three S’s”—sparkle, size, and shape.

The brand’s collective leadership experience is impressive, but atypical for a diamond company. Sparkle Cut was cofounded last year by Mark de Naray, former CEO of Sleep Number Bed, and Pat Hopf, a former chairman for Sleep Number Bed and founder of Petstuff (sold to PetSmart). The pair brought on Jo Lawson, a senior-level veteran of Apple and Movado, as Sparkle Cut’s CEO last fall.

Lawson, who worked with Apple founder Steve Jobs for a time and focused on technology at Movado, says she was drawn to the direct-to-consumer diamond brand because she’s “consumed by products that deliver.” She added, “When I first saw the diamonds and the sparkle they were getting, I was so excited. I thought, if this is baseline, I’m interested.”

She concedes that her pivot into diamonds, after focusing on technology for so long, is surprising. But says the brand’s outsider status has been advantageous, explaining, “Outsiders are great disruptors—we’re really the consumer—so in some ways being an outsider is easier.”

Lawson, a diamond lover in her personal life, says the consumer research the company’s R&D team unearthed early on, which stated that size and sparkle are what diamond consumers value most, underpinned her initial feelings that the product was primed for growth. “We feel we can lead consumers to rethink the 4Cs,” she says. “They can trade color and clarity for carat weight and sparkle. Our diamonds literally allow J and K color diamonds to perform like much higher grade diamonds.”

The company currently offers only round brilliant-cut diamonds, but the technology is mutable and can be applied to any gemstone type or cut, including lab-grown diamonds.

“There’s no diamond in the world that can’t be improved by what we do, with no loss of carat weight,” Lawson says. “We’re only just beginning what we can do. There are so many ways this business can go.”

Sparkle Cut is currently pursuing its second round of venture capital funding.