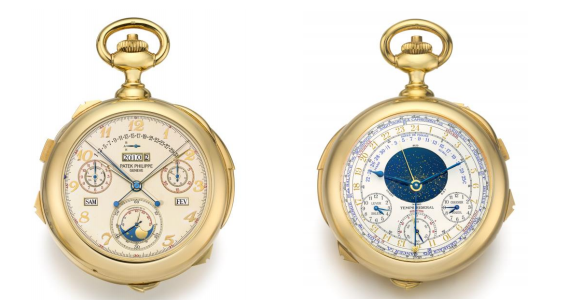 It can tell you the season, sunrise and sunset, even the zodiac sign

On May 14 in Geneva, Sotheby’s is auctioning the Patek Philippe Yellow-Gold Calibre 89, considered the most complicated watch ever created by the company.

The Calibre 89 was unveiled by Patek Philippe in 1989 to mark the company’s 150th anniversary. With 33 complications, it was then considered the most complicated watch ever produced, though it was eventually overtaken by Vacheron Constantin’s 57-complication 57260.

The Calibre 89 was 10 years in development and creation, and the company only created four—one in 18k white, one in yellow gold, one in rose gold, and one in platinum.

The watch consists of 1,728 parts, and it displays the seasons, times of sunrise and sunset, the equinoxes and solstices, and the signs of the zodiac.