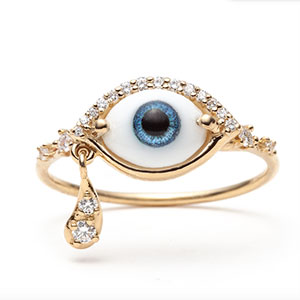 Whether it’s a ring topped by a 14k gold UFO alit with rainbow-colored diamonds or a pendant fashioned to depict an ancient tarot card, Montreal-based jewelry designer Sofia Ajram, founder of the Sofia Zakia collection, weaves pop culture, mysticism, and sci-fi into her most memorable jewelry designs.

Ajram, who’s also a visual artist, photographer, and ninja-level cosplay enthusiast (worth the click!) founded the brand in 2015 as Morphe, and almost right out of the gate found a champion in influential Brooklyn, N.Y., store Catbird. The collection is now also carried by ABC Carpet & Home and Love Adorned in New York City—and in similarly pacesetting shops around the world (Ajram also has her own store in Montreal).

It’s easy to compute her rapid rise. The market is flooded with pretty-but-bland fine fashion jewelry collections—many of them still riffing on the so-called daily gold aesthetic that took root in the early 2010s.

In this environment, mavericks stand out. And perusing Ajram’s collection, one can’t help but be blown away by her profound creativity and her ability to infuse so much humor and, well, magic into her designs. The designer’s personal influences are specific and interesting (more on those below)—not the usual “architecture and travel” fare—and they make her work unique.

For Suspiria, Ajram resurrects the snake-haired head of Medusa, notably, in a series of incredible rings and pendants, in which she treats the mythical monster like a goddess. In the notes of those product pages is a quote by Hélène Cixous: “You only have to look at the Medusa straight on to see her. And she’s not deadly. She’s beautiful and she’s laughing.”

We asked Ajram to chat about her new collection.

JCK: Where does the name Suspiria come from?

Sofia Ajram: Supposedly it means “to sigh” in Latin. Suspiria is also the title of a 1977 film by Dario Argento. I named the collection Suspiria after shooting our campaign in an old mansion. Unprompted, the aesthetic felt like some strange marriage between Suspiria and The Haunting of Hill House by Shirley Jackson. A lot of my work has referential origin.

Jewelry is like a love letter to something already in motion—in broad strokes like history or architecture, or in more personal stories. The beauty in it is that it continues to collect stories by its wearer after its inception.

What ideas, concepts, and visuals inspired this new collection?

Suspiria looks at broader iconography—eyes, hands, moons—and specific mythological imagery, like the head of Medusa, to weave together a collection that I felt had a connected energy to humanity’s own history.

I’ve been reading Joseph Campbell’s The Hero With a Thousand Faces. It’s moving to me how archetypes and icons transcend cultures and eras to form a greater language within our race about desires, hopes, and dreams.

With this new collection, in what ways did you want to evolve your brand?

Every collection moves forward by ways of storytelling, materials, and new twists on preexisting classics.

How did you get involved in jewelry and designing jewelry initially?

I fell into it. It’s not a very romantic story. I’ve just always loved making art and telling stories. I grew up loving film and reading endlessly. I discovered jewelry-smithing in my early 20s, and it combined my love of so many things. Goldsmithing allowed me to immortalize love letters to myth and cosmos in precious materials, so the work could be both meaningful to others and be passed down to gain a story of its own. I don’t think an artist can ask for anything more in life.