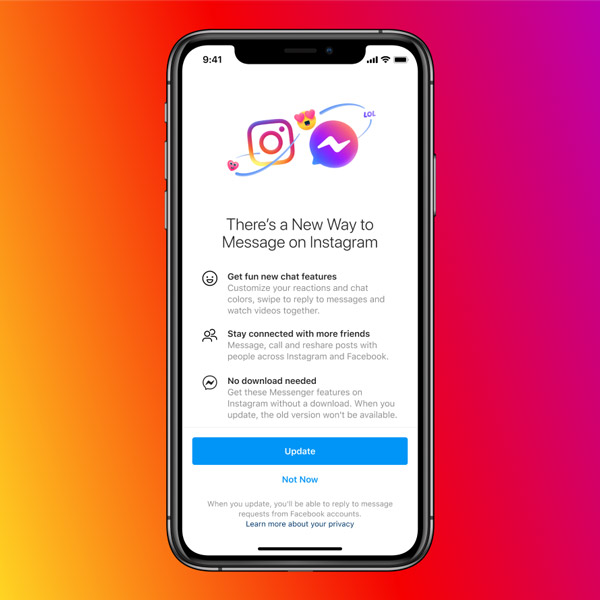 Last week Instagram announced an update to its DMs (direct messages), by incorporating its Messenger (a feature from Facebook that requires a separate app) into the Instagram experience.

The thinking is that users can keep all of their messages in one place, as opposed to having to go back and forth between app to keep track of their communications with friends and family.

In addition to this, Facebook has announced the introduction of 10 new features, including Selfie Stickers (a so-called hybrid of Boomerangs, emojis, and selfies); Watch Together, a feature that lets users watch IGTV during a video call; and Vanish Mode, which allows messages to automatically disappear once they’ve been seen.

So, basically, the good news is that if you have only the Instagram app downloaded but don’t have the Messenger app, those trying to contact you via Messenger will still be able to reach you, as it will show up in one tidy place on Instagram now (and vice versa).

Other additions include customizable chat colors and themes, the ability to forward a message, custom emoji reactions, and message effects (the last of which is said to be coming soon).

Read the full list and details of all the new features here.

Story Pins, which were announced back in June as an experimental feature, are a new type of pin that allows for more customization than before, giving the option to incorporate videos, voice-over, and image and text overlay. The purpose is to keep everything in-app, eliminating the need for users to leave by clicking through to another website. For creators who don’t have a separate website, these features will help them to tell a richer story and to engage more with their followers.

Story Pins can be saved to users’ boards for later, as with the traditional pins. To help users take action on these pins, creators can add a detail page with information such as ingredients in a recipe or materials needed for a DIY project (or, in the case of a jeweler, the details of a featured piece). These can also be tagged with topics of interest to ensure they reach the intended audience.

For more on this and other enriched features from Pinterest, visit Pinterest’s newsroom.