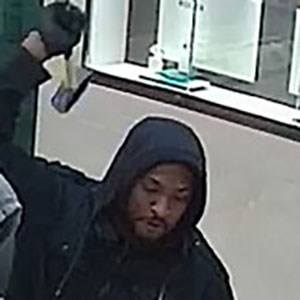 The industry has seen 20 smash-and-grab robberies in jewelry stores since October, as a troubling trend that began in the Midwest has now spread to other areas of the country.

“The frequency and the number of these crimes are growing and growing,” says Jewelers’ Security Alliance (JSA) president John Kennedy. “We think it’s very dangerous. This is really starting to erupt.”

Originally, these thefts were localized to the Midwest states of Michigan, Illinois, and Ohio. But lately, the JSA has seen smash-and-grabs occur in Kentucky, Massachusetts, Indiana, New York, Pennsylvania, and Missouri, hitting a variety of jewelers, from independents to chain stores.

While the JSA can’t say for sure the thefts in this latest spurt are connected, it believes they are, given the similarities in M.O.

Most of the thefts have gone like this: A group of men, generally masked, enter a store near closing time, between 6:30 p.m. and 8:30 p.m. The men don’t display weapons but attack cases with sledgehammers and steal high-value product, particularly diamonds and watches.

“They are generally out of there in a minute or two,” says Kennedy. “They are fairly skilled at hitting the right showcases. They get out of there quick. They don’t hang around.”

The JSA has issued the following tips for jewelers to avoid being the next victims:

– Hire armed, off-duty police officers to watch your store. If you already have an armed guard, make sure he or she stands near the door, particularly toward closing time.

– Have a buzzer at the door: It can help keep out potential robbers, since many times these men wear masks and carry obvious hammers.

– Install burglary-resistant, laminated glass and special frames in your showcases. These cases can withstand hammer blows and can keep losses down.

In addition, if the crooks are forced to make small holes, they can cut themselves and their blood can leave behind valuable DNA evidence.

– Spread high-end watches and diamond pieces among several showcases, rather than concentrating them in one or two showcases. This can also reduce your losses.

– Do not accost the robbers or otherwise resist, if you are hit by a smash-and-grab robbery.

“These are violent people,” says Kennedy. “They are going in with sledgehammers. They may have a weapon, or someone behind them might have a weapon, and they might use it if the wrong person goes after it or starts to grab them. You just don’t know.”

– Take surveillance photos from eye-level cameras; they can provide excellent evidence for the police. The photos from ceiling cameras are too often useless, capturing hats or tops of heads.

– Keep a log book of suspicious incidents. If those incidents are captured by surveillance video, put the footage aside in case you need to show it to police.

– Share information with other local jewelers, your local police, and JSA.

(Top image: Another surveillance photo from a smash-and-grab that occurred at a Pittsburgh jeweler on Feb. 22; courtesy of the Jewelers’ Security Alliance)