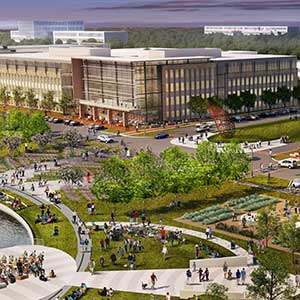 Signet Jewelers is closing its manufacturing facility in Dallas, resulting in the loss of over 100 jobs.

“We have evaluated consolidation in key areas of our business, seeking to understand production capacity, cost, and efficiency across our operations and distribution,” says a statement from Signet spokesperson David Bouffard. “Based on a review of our business, we have made the difficult decision to close the Signet Manufacturing Dallas facility, with full transition of operations activities to our existing facilities in Akron [Ohio] by June.”

The news that the manufacturing facility was closing was originally reported last week by Dallas Business Journal, which said that Signet filed a WARN notice with the state of Texas that it intended to lay off 122 workers in the area on May 24.

Signet first moved its Texas manufacturing into the 31,000 sq. ft. facility in Cypress Waters (pictured), a development outside Dallas, in 2016.

Signet has been trying to slash costs lately, with the ultimate goal of cutting $200 million annually, according to CEO Gina Drosos.

In February, it offered most of the employees at its Akron, Ohio, and Dallas corporate offices a “voluntary transition” package. It warned that if not enough workers take the package, it might have to do “non-voluntary head count reductions.”

At press time, it hasn’t specified how many people have taken that offer, but said it would provide those details when it announces its financial results. That announcement was postponed from March but will come this week, on April 3.