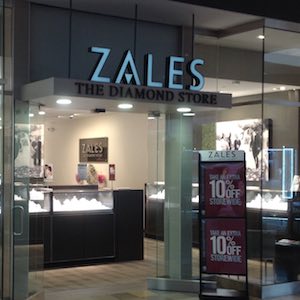 The company—which owns the Kay, Zales, Jared, and Piercing Pagoda chains in the United States—was a little more leery about December. It noted that same-store sales for Thanksgiving and Black Friday showed a low-single-digit drop, reflecting lower sales traffic. Conversion rates and the average transaction value rose, however.

Signet is also predicting comps might tumble over Christmas, given the continued spread of COVID-19, which requires capping in-store visits and has hurt store traffic. It declined to provide comps for November and December.

The company also posted $39.7 million of GAAP operating income, compared to a $39.9 million loss the prior year.

On a conference call following the results’ release, CEO Gina Drosos attributed the good numbers to the company’s embrace of omnichannel, as well as “product innovation and newness,” according to a Seeking Alpha transcript.

Drosos also noted that Signet moved up some of its promotions and marketing to earlier in the year, to reduce possible capacity issues around the holiday season. Additionally, the third-quarter growth may have been fueled by pent-up demand from the second quarter, when many of the company’s stores were closed, Drosos said.

The company scored with both bridal and fashion items. Winning brands include company staples like Le Vian, Vera Wang, and Neil Lane. Drosos also singled out the company’s new Pnina Tornai and Royal Asscher lines at Jared, and its Remixed Reimagined collection of recycled gold and diamonds, which has been launched at Zales.

The company’s emphasis on digital predated the pandemic, Drosos said, but that emphasis has given it a boost. She noted that Signet now has a 700-plus-person virtual sales team, and it’s hoping to train its entire sales force to sell online. She said it’s completed nearly 600,000 virtual appointments since it launched the service.

“When closures occur, we move quickly to capture the upside. We geo-target our marketing to serve customers left unserved. We look for opportunities to attract top talent when jobs are cut, and we leverage competitive closures to strengthen our real estate position within trade areas to serve customers even better.”

Drosos said that Signet has “begun to really tease apart” what its banners stand for.

Zales is targeting “a more style-oriented customer,” for both bridal and self-purchase. Kay targets the “sentimental gifter,” and it’s strong in bridal and “romantic gifting.” Jared has been “tiering up,” and is seeing strength at higher price points. Piercing Pagoda has the lowest price points in the chain, and it’s doing well in gold, particularly gold chains and earrings.