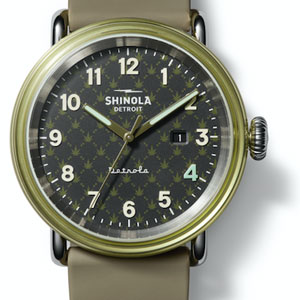 Shinola’s new Twenty After Four Detrola watch, which features a repetitive marijuana leaf print, is more than a trendy paean to pot smoking. To put it bluntly (had to do it!), it has serious goals.

The Detroit-based watchmaker has partnered with artist, actor, and activist Common to divide $176,400 in proceeds from the watch’s sales to two nonprofits that are working to overhaul criminal justice reform: the Anti-Recidivism Coalition, which strives to reduce incarceration and improve outcomes of formerly incarcerated people; and Cabrini Green Legal Aide, which provides legal support to low-income individuals negatively impacted by the criminal justice system within the Cabrini Green community in Chicago, Common’s hometown.

The watch’s name, Twenty After Four, nods to “420,” slang amongst cannabis enthusiasts for smoking pot around 4:20 p.m. (The origin story of how 420 came to be is long and winding but worth a look.) The name is also in reference to April 20, which has become weed’s unofficial holiday, with cannabis activists and enthusiasts gathering for events globally.

To help get the word out on its charitable new Detrola, Shinola’s partnered with actor Woody Harrelson, who’s been a loud and proud advocate for the legalization of marijuana for decades. Harrelson showed a photo of the watch Monday on his Instagram at (you guessed it) 4:20 p.m. The photo (below) was a bit fuzzy, which seems apropos.

I do believe it’s time. #Shinola

The watch is also priced at $420 and will be dropped in limited-edition batches every six to eight weeks, the company says. The design of the Detrola, which is Shinola’s sportiest watch yet, is low-key but features a standout green number on the four o’clock (and 20-minute) marker. Twenty After Four’s 43 mm resin case is topped by double-domed K1 crystal and anchored by a stainless steel core and Argonite 705 movement hand-assembled in Detroit.