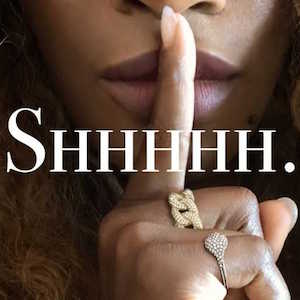 Travelers to next week’s JCK Las Vegas show will be greeted at the McCarren Airport baggage claim with a somewhat enigmatic image: A woman with a finger to her lips saying, “Shhh.”

If you don’t already recognize who this is, JCK can reveal the woman’s not-so-secret identity: tennis superstar Serena Williams. The ads are touting her new jewelry collection, which will be introduced at the show by Indian sightholder KP Sanghvi.

The Serena Williams Jewelry line will be a karat-gold diamond fashion collection aimed at the female self-purchase and gift market. It will first appear in stores in the third quarter of this year—initially majors, though it hopes to eventually expand to top-ranked independents. Introductory price points begin at $299 and will go up to $10,000.

For KP Sanghvi, which was approached by Williams’ representatives last year, the line was a chance to ally itself with a 23-time Grand Slam winner and four-time Olympic gold medalist, who is particularly admired by younger consumers. A recent YouGov poll ranked her as the most popular contemporary sports celebrity.

Adds vice president of marketing Laura Rubin: “We don’t see her as a tennis player. We see her as a female icon…. Women 25 to 40 just love her and admire her, and our dream is that they will love our jewelry and the white space that it fills in the fashion area of chain jewelers, and they will buy it for themselves and each other.”

Williams also has a clothing line and has allied herself with a wide variety of brands, from Nike to Beats. But she clearly has high hopes for jewelry. She has sported numerous pieces at her matches and is quite knowledgeable about the industry, Schachter says, insisting the diamonds in the collection be natural and ethically sourced. She also hopes to wear some items from the new line at the French Open next week. It’s also possible that some of the pieces will be sported by some of Williams’ famous friends.

The line will initially feature necklaces and rings—though one thing that seems like a no-brainer is what Schachter calls “a reinvention of the tennis bracelet.” While it’s unlikely that Williams will replicate Chris Evert’s happy accident of dropping her bracelet on the court, Schachter feels that Williams’ unique platform can reinvigorate the category.

“[At] this year’s U.S. Open, there will be imagery with her wearing the bracelet,” Schachter says.

The line will also feature a yet-to-be-determined charity component, which Williams also insisted on, Schachter says.

Williams told JCK via KP Sanghvi: “This collection is a beautiful celebration of the strong women in my life and around the world. I’m so grateful for the opportunity to bring a little sparkle and joy to special moments. I hope my designs inspire people to love themselves, believe in themselves, and, of course, treat themselves.”