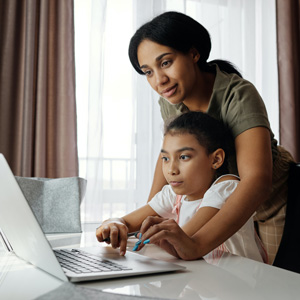 The new school year has begun for millions of kids. And more than half of U.S. students (an estimated 52%, according to a study by Burbio) are attending school from home, via technology-enabled distance learning.

We are not, as a nation, designed for this clumsy collision of working parents and homeschooled kids.

Parents who are lucky enough to still have jobs—and be working them from home—now have a second job to manage: homeschooling. And what about the millions of families with parents who have jobs that require them to show up in person? Who teaches the kids?

It’s an understatement to say that puzzling out the clump of career and family commitments will, at best, be dizzying for parents this fall. At worst, it will incapacitate.

You would think either frame of mind would negatively impact consumers’ spending, particularly when it comes to nonessential goods such as fine jewelry. But forecasts are mixed about how the back-to-school grind will shape consumer spending in the coming weeks and months.

A study published in June by Deloitte reported that parents, “driven by anxiety,” are shifting their purchasing behavior with the “new realities of schooling.” Forty percent of those polled for the study said they were planning to buy fewer traditional back-to-school supplies this year “as they invest in digital resources to supplement their children’s education.”

The survey predicted that spending would increase for tech—computers, digital subscriptions, and devices—while clothing and other categories would be flat (or down) compared to last year.

It’s an opinion shared by the National Retail Federation, which published survey results on July 15 stating that consumers “tentatively” plan to spend a record amount to prepare students for school and college this year, “as they buy more laptops and computer accessories in anticipation that at least some classes will take place online because of the coronavirus pandemic.”

So where does all that tech spending leave luxury goods?

In its second-quarter call with investors last week, Macy’s Inc. asserted that it plans to “lean hard” into luxury, spurred by strong spending in the category since the pandemic started. That would suggest that stressed-out consumers can, in fact, be super spenders and champion impulse buyers of high-end goods.

But COVID-19’s stressors were generally accompanied by an alleviation of physical responsibility for consumers, as workplaces shut down temporarily, vanquishing commute times, in-person duties, and the time it takes every morning to brush our hair, put on lipstick/shave, etc.

The stress that’s coming for millions of Americans homeschooling their kids during the pandemic is the kind that accompanies feeling tapped out and stretched too thin. It may be a different animal.

The good news is that jewelry sales have shown surprising resilience during the pandemic. At JCK, we’ve collectively heard dozens of stories from retailers and brand owners who have seen their sales increase year-over-year during the pandemic. Expensive overseas vacations were off the table for U.S. consumers this spring and summer, and some of that spending undoubtedly filtered into jewelry and other luxury tangibles.

But will working parents suddenly (and again) shouldering more than has ever been asked or expected from them be too exhausted to stop by their local jewelry retailer to pick up that special birthday gift? Will they stop surfing e-commerce sites after the kids are asleep?

Yes, the start of the school year is just one of myriad challenges U.S. consumers are currently facing. But its impact on the national mood could potentially shift retail’s trajectory.